Use of Force: A Thriller (The Scot Harvath Series #16) (CD-Audio) 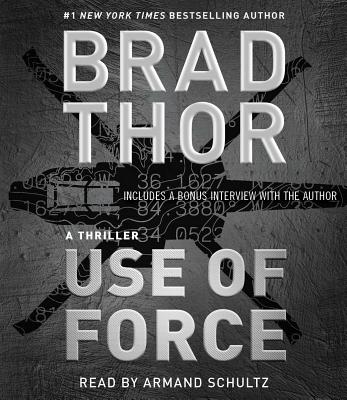 By Brad Thor, Armand Schultz (Read by)
Email or call for price.
Hard to Find

This is book number 16 in the The Scot Harvath Series series.

From #1 New York Times and #1 Wall Street Journal bestselling author Brad Thor comes “his latest pulse-pounding adventure” (The Real Book Spy) that follows covert operative Scot Harvath as he is called upon to stop an ISIS-led plot to destroy the Vatican.

As a storm rages across the Mediterranean Sea, a terrifying distress call is made to the Italian Coast Guard. Days later, a body washes ashore. Identified as a high value terrorism suspect (who had disappeared three years prior), his name sends panic through the Central Intelligence Agency. Where was he headed? What was he planning? And could he be connected to the “spectacular attack” they have been fearing all summer? In a race against time, the CIA taps an unorthodox source to get answers: Navy SEAL turned covert counterterrorism operative, Scot Harvath. Hired on a black contract, Harvath will provide the deniability the United States needs, while he breaks every rule along the way.

Teeming with fascinating characters and electrifying intrigue, Brad Thor does it again and proves why he is known around-the-world as the master of thrillers.