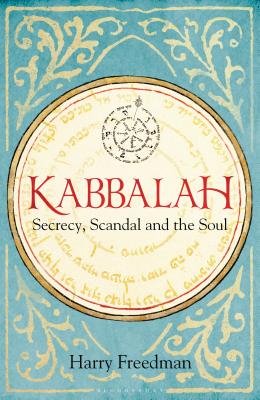 Harry Freedman, author of The Talmud: A Biography and The Murderous History of Bible Translations, explores the mysterious Jewish mystical tradition of Kabbalah.

Kabbalah is popularly known as a fashionable system for personal and spiritual insight, a Jewish mystical tradition popularized by devoted celebrities like Madonna, Gwyneth Paltrow, Demi Moore, and Britney Spears. But behind the hype and simplicity of "pop-Kabbalah" lies an ancient, complex and very profound system that can take a lifetime to master. Kabbalah: Secrecy, Scandal and the Soul is a short introduction that untangles the complex history and spiritual tradition behind the phenomenon.

Kabbalah is difficult to define. The very phrase "story of Kabbalah" is as opaque and mysterious as the topic itself. This of course is its appeal. The word itself means "received." For over half a millennium, individuals and movements with no attachment to Judaism have incorporated Kabbalah into their own spiritual traditions. Kabbalah flourished in the Renaissance and its method was adopted in varying measures by Hermeticists, Rosicrucians, Freemasons and tarot card readers. Isaac Newton, Gottfried Leibnitz, Carl Jung and Harold Bloom have all admitted to the influence of Kabbalah. But it all goes back to the Hebrew Bible where the prophet Ezekiel described in detail his vision of the heavenly throne, perceived as a chariot.

Kabbalah became fashionable in the late 1960s in the wake of the hippy counter-culture and with the approach of the new age, and enjoyed its share of fame, scandal, and disrepute as the twenty first century approached.

This concise, readable, and thoughtful history of Kabbalah tells its story as it has never been told before. It demands no knowledge of Kabbalah, just an interest in asking the questions "why?" and "how?"

Harry Freedman is a writer and academic with a PhD in Aramaic. His publications include The Gospels' Veiled Agenda, The Murderous History of Bible Translations and The Talmud: A Biography. He has written for the Guardian, Jewish Chronicle, Jewish Quarterly, Judaism Today and contributed to the Encyclopaedia of Modern Jewish Culture.

“Welcome to the curious but fascinating world of Harry Freedman's Kabbalah: Secrecy, Scandal and the Soul, a cheerfully non-partisan, no-frills attempt at demystifying one of the world's most mysterious, opaque and esoteric spiritual traditions.” —Spectator

“Freedman navigates the story with great skill and good judgment […] In a secular age such as our own, when popular theological literacy is at an all-time low [he] has undoubtedly done a great service by rescuing Kabbalah from the pile” —Daily Telegraph

“An excellent presentation on the history of the Kabbalah. A must-have on the bookshelf for anyone who studies this work. The book provides tools to help anyone navigate through life with optimal success. (5 stars)” —NetGalley