Every Person in New York (Paperback) 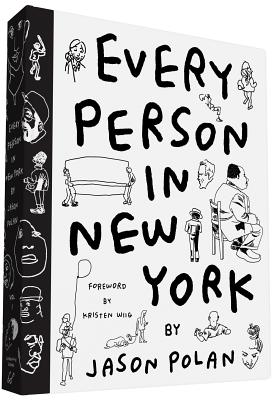 By Jason Polan, Kristen Wiig (Foreword by)
$24.95
On Our Shelves Now

Jason Polan is on a mission to draw every person in New York, from cab drivers to celebrities. He draws people eating at Taco Bell, admiring paintings at the Museum of Modern Art, and sleeping on the subway. With a foreword by Kristen Wiig, Every Person in New York, Volume 1 collects thousands of Polan's energetic drawings in one chunky book. As full as a phone book and as invigorating as a walk down a bustling New York street, this is a new kind of love letter to a beloved city and the people who live there.

Jason Polan is an illustrator whose work has been published in the New Yorker, Metropolis magazine, and in the New York Times as part of a weekly column. He has exhibited work internationally and has also drawn every piece of art in the Museum of Modern Art, twice. He lives in New York, of course.

“In 2008, Jason Polan set himself the challenge of drawing every person in New York. Like Sufjan Stevens’s aim to make 50 albums of the United States, it was essentially an impossible project, but what’s come out of it is undoubtedly a success. The artist and Cut collaborator has drawn an impressive 36,000-plus people to date, and those sketches are all compiled in Every Person in New York, along with a foreword by Kristen Wiig. It’s out on August 18, with a key addendum to its title: Volume 1. Thumb through a copy to find sketches and scrawled captions of New Yorkers waiting in line, subway riders, famous faces, and, if you’ve been to New York City in the last seven years, maybe even yourself.” —New York magazine-

“In 2008, illustrator Jason Polan set out to capture the enormous human poetics compressed in Gotham’s geographic smallness by drawing every person in the city. The first seven years of this ongoing project, totaling drawings of 30,000 people, are now collected in Every Person in New York—a marvelous tome of Polan’s black-and-white line drawings, colored in with the intense aliveness of a city where, as E.B. White wrote more than half a century earlier, ‘wonderful events are taking place every minute.’ What emerges is a kind of poetry—fragmentary glimpses of ideas and images, commanded by an internal rhythm to paint a complete whole of this human hive.” —Brain Pickings-

“In 400+ pages and 30,000 people, Jason Polan presents a big-hearted and humanistic picture of the city. He draws at museums and on the subway, he draws his friends in loving detail and celebrities in unposed real-time situations, like Yoko Ono walking up the block away from him.… Getting to flip through years of his work at home, freed from seeing it on Instagram, and being able to look as closely and for as long as I like, has been one of the chief pleasures of my summer, which is all a long way to say: I think you will like this book.” —Lucky Peach-

“This digest of sketches brings to life the everyday moments of New Yorkers and finds a spark of excitement in the sometimes-banal shuffle of city living.” —Monocle magazine-

”Jason Polan’s drawings exude, in unbroken but flexible lines, the momentum of a Manhattan streetscape with only brief moments of stillness. Those pauses can last minutes or over an hour, enough time for fully textured, impressionistic portraits. But more often Mr. Polan’s drawings are of scenes that pass in seconds: a father ordering hot dogs for his stubborn children, or Diane Keaton trying to hail a cab.” —The New York Times-