Unicorn on a Roll (Phoebe and Her Unicorn #2) (Hardcover) 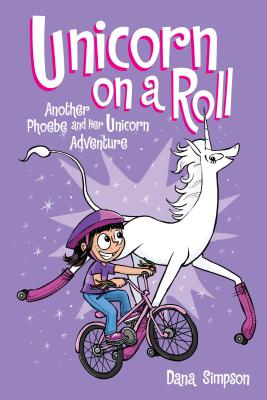 This is book number 2 in the Phoebe and Her Unicorn series.

The magical friendship of Phoebe and her best friend, unicorn Marigold Heavenly Nostrils, is back in this second adventure of a girl and her mythical creature!

One year has passed since Phoebe skipped a rock across a pond, accidentally hit a unicorn in the face, and was granted a single wish—which she used to make the unicorn, Marigold Heavenly Nostrils, her obligational best friend. In some ways, not much has changed. At school Phoebe still clashes with her rival--and sometimes “frenemy”--he ever-taunting and imperious Dakota. Outside of school, she still fills her free time with extra-credit homework assignments, dramatic monologues about the injustices associated with school cliques, and imaginative conspiracy theories regarding global forces like the “powerful construction paper lobby.” But unlike before, Phoebe now has a best friend to share it with—someone to make her laugh and to listen to all her extravagant ideas.

In this second volume of Heavenly Nostrils, titled, Unicorn on a Roll, the reader is invited on a journey into the lives of Phoebe and Marigold as they navigate the difficulties of grade school, celebrate the winter holidays, and explore their super hero/super villain personas together. Join in the fun, as Phoebe competes against Dakota for the leading role of “Lisa Ladybug” in their fourth-grade play—or as she struggles to “manage” the PR debacle related to her nose-picking-scandal. (“I will neither confirm nor deny the events surrounding Boogergate.”) Witness a band of unicorns staging an “intervention” and learn all the details of Marigold’s secret crush on a mysterious creature she has never seen. Perhaps most important, watch as this surprising friendship between a charming, nine-year-old dreamer and a vain, mythical beast forever changes both of them for the better.

Dana Claire Simpson grew up in Gig Harbor, Washington, drawing the entire time. She eventually graduated from The Evergreen State College, despite having spent all her time drawing, and not always for credit.

From 1998 to 2008, she drew the internet comic strip Ozy and Millie. After winning the Amazon-sponsored Comic Strip Superstar Contest in 2009, Andrews McMeel Syndication signed her to a development deal for Heavenly Nostrils, which was later renamed Phoebe and Her Unicorn.

She currently lives in Santa Barbara, California, with her tech genius spouse and her fairly stupid cat.

“The book is a perfect mix of ongoing stories…I plainly love this strip, and I love the books.” (Cory Doctorow, BoingBoing)

“…charming…the comparison to Calvin and Hobbes is apt—it has a joke-a-day format with recurring themes and gentle, winning humor that often results in guffaws. Also like Calvin and Hobbes, there is a thin veneer of snarky cynicism that will keep older readers interested in the stories well beyond most children’s magical unicorn-loving phase.” (Booklist)

Named one of “14 Notable Chapter Books for Summer Reading” list; “My kids and I adore these characters and love this new book. It’s one we’ll read over and over again.” (Melissa Taylor, Imagination Soup)

“This is an excellent addition to a family-friendly home library. Adults and kids alike will love this warm and witty book. Buy it!” (Kala Kumar, Examiner.com)