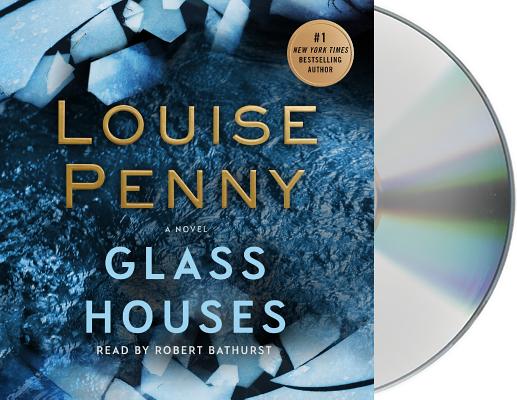 By Louise Penny, Robert Bathurst (Read by)
Please email or call us for pricing on this book.

This is book number 13 in the Chief Inspector Gamache Novel series.

"...the events in GLASS HOUSES challenge Gamache's conscience unlike any of the previous audiobooks, with Bathurst prying open the hero's heart and soul and laying it bare for listeners to experience at a visceral level." — Audiofile Magazine

When a mysterious figure appears in Three Pines one cold November day, Armand Gamache and the rest of the villagers are at first curious. Then wary. Through rain and sleet, the figure stands unmoving, staring ahead.

From the moment its shadow falls over the village, Gamache, now Chief Superintendent of the Sûreté du Québec, suspects the creature has deep roots and a dark purpose. Yet he does nothing. What can he do? Only watch and wait. And hope his mounting fears are not realized.

But when the figure vanishes overnight and a body is discovered, it falls to Gamache to discover if a debt has been paid or levied.

Months later, on a steamy July day as the trial for the accused begins in Montréal, Chief Superintendent Gamache continues to struggle with actions he set in motion that bitter November, from which there is no going back. More than the accused is on trial. Gamache’s own conscience is standing in judgment.

In Glass Houses, her latest utterly gripping audiobook, number-one New York Times bestselling author Louise Penny shatters the conventions of the crime novel to explore what Gandhi called the court of conscience. A court that supersedes all others.

LOUISE PENNY is the author of the #1 New York Times and Globe and Mail bestselling series of Chief Inspector Armand Gamache novels. She has won numerous awards, including a CWA Dagger and the Agatha Award (seven times), and was a finalist for the Edgar Award for Best Novel. In 2017, she received the Order of Canada for her contributions to Canadian culture. Louise lives in a small village south of Montréal.

"We're so glad Robert Bathurst will be back to narrate the latest in Penny's series." -AudioFile Editor's Pick

"The audio book is splendidly read by Robert Bathurst." -Inside New Jersey

Praise for A Great Reckoning:

"Robert Bathurst puts his own indelible stamp on Chief Inspector Armand Gamache in Louise Penny's twelfth Three Pines puzzle. . . . If you haven't listened to this series, start at once. You'll love your stay in Three Pines."—AudioFile Earphones Award Winner

"Bathurst beautifully expressed the mood and tenor of Penny's characters, themes, and plots. A marvelous entry in an amazing series."—Library Journal, Starred Review