A Taste for Death (Paperback) 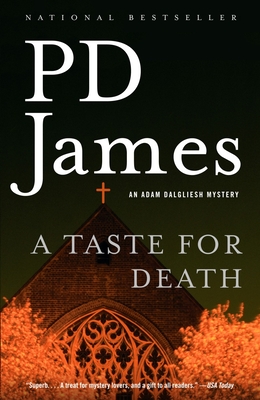 When the quiet Little Vestry of St. Matthew's Church becomes the blood-soaked scene of a double murder, Scotland Yard Commander Adam Dalgliesh faces an intriguing conundrum: How did an upper-crust Minister come to lie, slit throat to slit throat, next to a neighborhood derelict of the lowest order? Challenged with the investigation of a crime that appears to have endless motives, Dalgliesh explores the sinister web spun around a half-burnt diary and a violet-eyed widow who is pregnant and full of malice--all the while hoping to fill the gap of logic that joined these two disparate men in bright red death. . . .

P. D. James is the author of twenty books, many of which feature her detective hero Adam Dalgliesh and have been televised or filmed. She was the recipient of many honors, including the Mystery Writers of America Grand Master Award and the National Arts Club Medal of Honor for Literature, and in 1991 was created Baroness James of Holland Park. She died in 2014.

“Superb…. A treat for mystery lovers, and a gift to all readers.” —USA Today

“A first-rate detective novel, but it goes beyond that fine achievement to another realm…. An intricate, compassionate novel.” —The Boston Globe

"Her best and most ambitious tale to date.... The reigning mistress of murder.... A craftsman with a poet's vision, she not only detects evil but attempts to uncover the more elusive--and enduring--enigmas of the human psyche that lead to it." —Time

"Rich, multifaceted.... Involving and genuinely moving.... So ambitious and thematically challenging that it has few peers in its genre. A Taste for Death provides all the entertaining elements of a more conventional murder mystery, but James continually delivers that something extra.... James at her best, at the zenith of her writing career." —Houston Chronicle

"Literary grace of a high order and the ability to give full dimensions to both character, relationships and environment.... She writes with precision and elegance." —Los Angeles Times

"Rings of authenticity ... compelling.... The ability to haunt has earned P. D. James the title of 'queen of crime.' Long may she reign." —Chicago Sun-Times

"James still delivers the pace and tensions of a mystery yarn better than any living writer." —People

"A pleasure to read.... One avidly turns the pages." —Cleveland Plain Dealer

"The best of James' ten novels.... She has blended a whodunit and a fully realized modern novel." —The New York Times Magazine

"One reads a P. D. James novel in something like the same spirit that one reads a novel by Zola, Balzac, Thackeray, or Dickens." —The Christian Science Monitor