I Know You're Lying (Paperback) 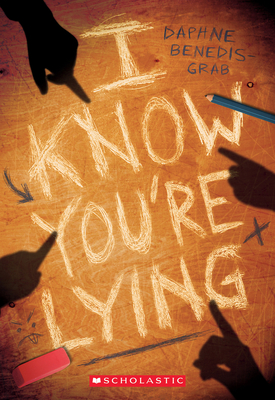 This twisty middle school thriller is One of Us is Lying meets Pretty Little Liars for young readers.

There's been a theft at the middle school! Sasha's bag has been stolen from her locker.

The security cameras on the school's front entrance captured four students entering the building early. Present at the time of the crime, Maddie, Jack, Nora, and Henry become top suspects. Each of them has a reason to dislike Sasha. Each has something to hide. But which of them is responsible for the break-in? And can they figure out who the thief is before Sasha gets her revenge... on all of them.

Set during a single day of school, this is a gripping, twisty read about what happens when bullying goes too far, written by Daphne Benedis-Grab, author of I Know Your Secret.

Daphne Benedis-Grab is the author of the middle-grade thrillers I Know Your Secret and I Know You’re Lying. She is the part-time school librarian at PS 32 in Brooklyn, where she gets to hang out with kids and books all day (she is a very lucky person!). She lives in New York City with her husband, two teens, and a cat who has been known to sit on her computer if he feels she has been typing too long. Visit her at daphnebg.com

Praise for I Know You're Lying

"One of Us Is Lying for the middle-grade set. A socially conscious whodunit." -Kirkus Reviews

"A tightly coiled thriller positing that crimes, like people, have more to them than it might intially seem." -Publishers Weekly

Praise for I Know Your Secret

"This enjoyable middle grade thriller tackles bullying, environments in which it is allowed to propagate, and the importance of speaking truth to power." - Publishers Weekly

"A middle-grade tour de force. An exploration of why we conceal the truth, I Know Your Secret forces four children to come to terms with the secrets they have hidden from everyone." - The Nerd Daily

"If you wished you had a middle-grade counterpart to a Karen McManus or Pretty Little Liars novel, you should definitely pick up this twisty and compelling novel." - The Young Folks