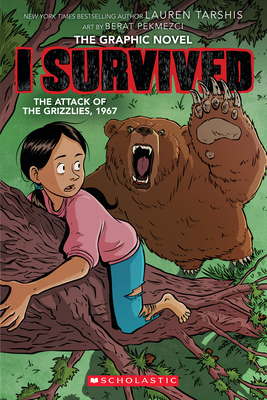 A gripping graphic novel adaptation of Lauren Tarshis's bestselling I Survived the Attack of the Grizzlies, 1967, with text adapted by Georgia Ball and art by Berat Pekmezci.

No grizzly has ever killed a human in Glacier National Park before... until tonight. Eleven-year-old Melody Vega and her family come to Glacier every year. Mel loves it here — the beautiful landscapes and wildlife make it easy to forget her real-world troubles. But this year is different. With Mom gone, every moment in the park is a reminder of the past.

Then Mel comes face-to-face with a mighty grizzly. She knows basic bear safety: Don't turn your back. Don't make any sudden movements. And most importantly: Don't run.

That last one is the hardest for Mel; she's been running from her problems all her life. If she wants to survive tonight, she'll have to find the courage to face her fear.

Based on the real-life grizzly attacks of 1967, this bold graphic novel tells the story of one of the most tragic seasons in the history of America's national parks — a summer of terror that forever changed ideas about how grizzlies and humans can exist together in the wild.

Lauren Tarshis's New York Times bestselling I Survived series comes to vivid life in graphic novel editions. Perfect for readers who prefer the graphic novel format, or for existing fans of the I Survived chapter book series, these graphic novels combine historical facts with high-action storytelling that's sure to keep any reader turning the pages. Includes a nonfiction section at the back with facts and photos about the real-life event.

Lauren Tarshis's New York Times bestselling I Survived series tells stories of young people and their resilience and strength in the midst of unimaginable disasters and times of turmoil. Lauren has brought her signature warmth and exhaustive research to topics such as the battle of D-Day, the American Revolution, Hurricane Katrina, the bombing of Pearl Harbor, and other world events. She lives in Connecticut with her family, and can be found online at laurentarshis.com.
Berat Pekmezci is an Istanbul-born, London-based illustrator working on a wide range of personal and commercial projects. He is the illustrator of several comics and graphic novels including DC Comics’ The Indestructibles. He is also the illustrator of Top 20 Daredevils: Countdown to Danger. When not illustrating, Berat spends his time reading comic books and collecting football jerseys.

Praise for I Survived the Sinking of the Titanic, 1912 (I Survived Graphic Novel #1):

"The first installment of Tarshis' sprawling prose disaster oeuvre for young readers is reimagined in visually interesting full-color comic panels that support its recognizable thrilling pace and convenient twists. Many of the most exciting scenes are largely wordless, spotlighting the propulsive action amid growing tensions. A fresh and interesting adaptation, making for an easy crowd pleaser." -- Kirkus Reviews

Praise for I Survived the Nazi Invasion, 1944 (I Survived Graphic Novel #3):

“A crowd pleaser … Those familiar with this installment will anticipate the traumas and triumphs of the story, while newcomers to the series will also be pulled in; all will be satisfied with the mostly happy resolution … Another effective comics translation in this first-rate series.” – School Library Journal

Praise for I Survived the American Revolution, 1776:

Praise for I Survived the Destruction of Pompeii, AD 79:

"Tarshis serves up another gripping adventure... with the light-speed pacing and death-defying maneuvering fans have come to expect." -- Booklist

Praise for I Survived the Battle of Gettysburg, 1863:

Praise for I Survived Hurricane Katrina, 2005:

"Expressive illustrations capture the drama of the storm and its aftermath, but the book's real power comes from its exploration of what it means to be a hero." -- Booklist

Praise for I Survived the Shark Attacks of 1916:

"A gripping story that will hold the interest of reluctant readers." -- School Library Journal

Praise for I Survived the Sinking of the Titanic, 1912: