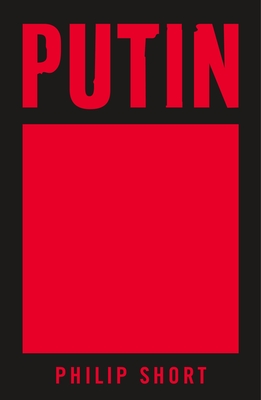 By Philip Short
$25.00
Unavailable
Not Yet Published

The first comprehensive, fully up-to-date biography of Vladimir Putin, woven into the tumultuous saga of Russia over the last sixty years.

“Anyone wanting to learn more about Putin’s personality, ideas, power and the threat he has come to pose to world peace should read this outstanding biography.”
—New York Times bestselling author Ian Kershaw

Vladimir Putin is the world’s most dangerous man. Alone among world leaders, he has the power to reduce the United States and Europe to ashes in a nuclear firestorm and has threatened to do so. He invades his neighbors, most recently Ukraine, meddles in western elections, and orders assassinations inside and outside Russia. His regime is autocratic and deeply corrupt. But that is only half the story.

Unflinching, hard-hitting, and objective, former BBC correspondent and author Philip Short’s biography gives us the whole tale, up to the present day. To the fullest extent anyone has yet been able, Short cracks open the strongman’s thick carapace to reveal the man underneath those bare-chested horseback rides. In this deeply researched account, readers meet the Putin who slept in the same room as his parents until he was twenty-five years old, who backed out of his wedding right beforehand, and who learned English in order to be able to talk to George W. Bush.

Vladimir Putin is wreaking havoc in Europe, threatening global peace and stability and exposing his fellow citizens to devastating economic countermeasures. Yet puzzlingly many Russians continue to support him. This book is essential reading for anyone who wants to understand the many facets of the man behind the mask that Putin wears on the world stage.

Drawing on almost two hundred interviews conducted over eight years in Russia, the United States, and Europe and on source material in more than a dozen languages, Putin will be the last word for years to come.

Philip Short has written several definitive biographies including Mao: A Life and Pol Pot: Anatomy of a Nightmare. He earlier had a long career as a foreign correspondent in Moscow, Beijing, and Washington, D.C., for the BBC, the Economist, and the Times of London.

“A compelling, impressive and methodically researched account of Putin’s life so far. [It] extensively covers the dark moments of Putin’s career…. The Putin of Short’s book is not someone you would invite to dinner: he is crude and cold, arrogant and heartless.”
—Peter Baker, The New York Times

“Anyone wanting to learn more about Putin’s personality, ideas, power and the threat he has come to pose to world peace should read this outstanding biography.”
—Ian Kershaw, author of Hitler

“A biography years in the making offers a thorough look at the Russian president’s life, career and concentration of power. Short…draws on hundreds of interviews for this portrait, charting Putin’s transformation into a ruthless autocrat.”
—The New York Times Book Review

“Magisterial…. Illuminating…. Short’s Putin is a man of violent emotions ruthlessly repressed; habitually late (a power play over those kept waiting); devoid of small talk; so inscrutable that when he proposed to his wife she initially thought he was dumping her.”
—The Guardian

“Philip Short’s elegantly written and pacy Putin is a doorstopper and the product of eight years of research. Its publication, a few months after the invasion, makes it the most up-to-date biography available of Vladimir Putin.”
—Gideon Rachman, Financial Times

“An unflinching, comprehensive, up-to-date biography of autocratic Russian President Vladimir Putin as he wreaks havoc on the global stage, digging deep to reveal the man behind the mask.”
—USA Today


Praise for Biographies by Philip Short

“Nowhere has the story . . . been told with greater authority.”
—The Washington Post

“Unerringly broadens the inquiry to the point where serious history begins, and serious judgments can be made.”
—Financial Times

“The best sort of biography—deeply informed, entirely readable, and at the level of sophistication and complexity needed for its particular subject.”
—Richard Bernstein, coauthor of The Coming Conflict with China