The Desperate Hours: One Hospital's Fight to Save a City on the Pandemic's Front Lines (Hardcover) 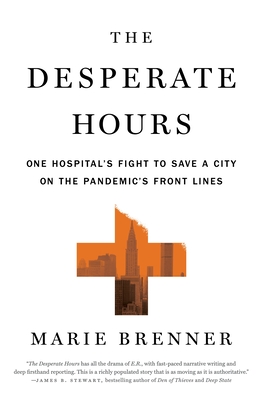 AWARD-WINNING VANITY FAIR WRITER Marie Brenner shares a remarkable depiction of New York—a city in crisis—based on new, behind-the-scenes reporting that captures the resilience, peril, and compassion of the early days of the Covid pandemic.

Before long, America’s largest metropolis was at war against a virus that mercilessly swept through its five boroughs. It became apparent that if Covid wasn’t somehow halted, the death count in New York alone would be in the hundreds of thousands. And if New York’s hospitals failed, what chance did the rest of the country have?

Brenner, having been granted unprecedented 18-month access to the entire New York-Presbyterian hospital system, tells the story of the doctors, nurses, residents, researchers, and suppliers who tried to save lives across Manhattan, Queens, and Brooklyn and the northern periphery of the city. Drawing on more than 200 interviews, Brenner takes us inside secure ICU units, sealed operating rooms, locked executive suites, unknown basement workshops, and makeshift clinics to provide extraordinary witness to the war as it was waged on the front line.

But The Desperate Hours is more than a thrilling account of medicine under extreme pressure. It is an intimate portrait of courageous men and women coming together in their devotion to duty, their families, each other, and the city they loved more than any other.

Marie Brenner is the author of over half a dozen books and is a writer at large for Vanity Fair. She has been a staff writer at The New Yorker, a contributing editor at New York, and has won numerous awards for her reporting around the world. Her exposé of the tobacco industry was the basis for the 1999 movie The Insider, which was nominated for seven Academy Awards®, including Best Picture. She is also a producer of the 2019 documentary Where’s My Roy Cohn?

"Urgent. . . . Brenner creates a tense, stirring picture of the impact of Covid-19 on New York-Presbyterian Hospital’s campuses. . . . [Her] probing investigation includes animated profiles of a large cast of characters, creating a palpable sense of trauma, pain, and vulnerability in what one cardiologist characterized as nothing less than war." —Kirkus (starred review)