Wake the Bones: A Novel (Hardcover) 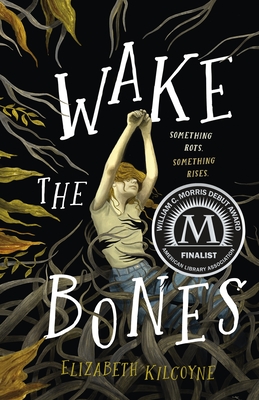 “Dark, gripping, and gorgeous, Wake the Bones will lead you into the woods and keep you up late. As lush and sweltering as a Kentucky summer... Elizabeth Kilcoyne is a force.” - Gwenda Bond, New York Times bestselling author

The sleepy little farm that Laurel Early grew up on has awakened. The woods are shifting, the soil is dead under her hands, and her bone pile just stood up and walked away.

After dropping out of college, all she wanted was to resume her life as a tobacco hand and taxidermist and try not to think about the boy she can’t help but love. Instead, a devil from her past has returned to court her, as he did her late mother years earlier. Now, Laurel must unravel her mother’s terrifying legacy and tap into her own innate magic before her future and the fate of everyone she loves is doomed.

Elizabeth Kilcoyne’s Wake the Bones is a dark, atmospheric debut about the complicated feelings that arise when the place you call home becomes hostile.

"Seething with shadows, summer, and uniquely southern magic, Wake the Bones is a powerful debut that captures the ache of home being a place you simultaneously love and loathe." - Hannah Whitten, New York Times bestselling author of For the Wolf

ELIZABETH KILCOYNE is an author, poet, and playwright from Lexington, Kentucky, who began this story after stacking rocks in her family cemetery one day when she realized she was standing on her own grave. She has been published in several literary journals including Still: The Journal. Wake the Bones is her first novel.

The Montanian Book of the Week

Bustle, "The Most Anticipated Books Of July 2022"

Epic Reads, "The 18 Most Anticipated Books to Read in July"

Crime Reads, "Summer Fiction Preview: 19 YA Novels Perfect for Mystery and Thriller Fans" and "23 (More) Horror Novels to Look Out for in 2022"

"[A]tmospheric and evocative. Grounding depictions of the natural world are as vivid and lush as the descriptions of haunting horrors that are beautiful in their gruesomeness... In Kilcoyne, YA horror has found a new standard-bearer." - Kirkus Reviews (starred review)

"An eerie Southern Gothic tale full of dark magic and haunting imagery, this novel is one part horror and one part coming-of-age saga, with a little bit of fantasy thrown on top." - Paste Magazine, "The Best New YA Books of July 2022"

"..Wake the Bones is a novel for young adults that doesn’t pretend people in their late teens are the same as ten year old children... Those weird cusp years are the hardest to render honestly, but Kilcoyne has done a phenomenal job—especially in dealing with how affection and sex play out among a close-knit group of friends." - Tor.com

"Eerie." - Buzzfeed, "Get Ready, Because These Are All The Best Books Releasing In July"

“Dark, gripping, and gorgeous, Wake the Bones will lead you into the woods and keep you up late. As lush and sweltering as a Kentucky summer... Elizabeth Kilcoyne is a force.” - Gwenda Bond, New York Times bestselling author

"Raw, emotional, and deliciously gross, Wake the Bones is a read that will cling to your subconscious long after its final page." - Lauren Blackwood, New York Times bestselling author of Within These Wicked Walls

"Deliciously vile and viciously emotional, Wake the Bones is a debut you'll want to savor but will be forced to devour whole. Kilcoyne richly imagines a world where life and death are all tangled together, and love and loss are the true magic. I was held captive to the last haunting page and I hoped there was no release." - Courtney Gould, author of The Dead and the Dark

"Wake the Bones is an eerie southern gothic with dark magic, haunting atmosphere, and an engaging plot that kept my eyes glued to the pages." - Alexis Henderson, author of The Year of the Witching

"With atmosphere as close and thick as summer heat, Wake the Bones is an unflinchingly gruesome delight. Kilcoyne’s lush, spellbinding prose kept me racing through the pages—and examines the ways small-town horrors soak into the very earth." - Allison Saft, New York Times bestselling author of A Far Wilder Magic

"Seething with shadows, summer, and uniquely southern magic, Wake the Bones is a powerful debut that captures the ache of home being a place you simultaneously love and loathe." - Hannah Whitten, New York Times bestselling author of For the Wolf