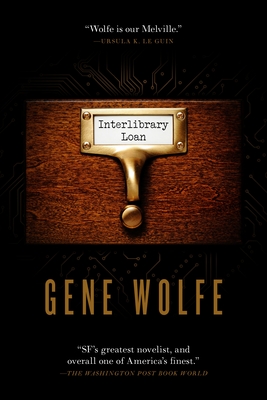 Interlibrary Loan is the brilliant follow-up to A Borrowed Man: the final work of fiction from multi-award winner and national literary treasure Gene Wolfe.

Hundreds of years in the future our civilization is shrunk down but we go on. There is advanced technology, there are robots.

And there are clones.

E. A. Smithe is a borrowed person, his personality an uploaded recording of a deceased mystery writer. Smithe is a piece of property, not a legal human.

As such, Smithe can be loaned to other branches. Which he is. Along with two fellow reclones, a cookbook and romance writer, they are shipped to Polly’s Cove, where Smithe meets a little girl who wants to save her mother, a father who is dead but perhaps not.

And another E. A. Smithe… who definitely is.

Gene Wolfe (1931-2019) was the Nebula Award-winning author of The Book of the New Sun tetralogy in the Solar Cycle, as well as the World Fantasy Award winners The Shadow of the Torturer and Soldier of Sidon. He was also a prolific writer of distinguished short fiction, which has been collected in such award-winning volumes as Storeys from the Old Hotel and The Best of Gene Wolfe.

A recipient of the World Fantasy Award for Life Achievement, the Edward E. Smith Memorial Award, and six Locus Awards, among many other honors, Wolfe was inducted into the Science Fiction Hall of Fame in 2007, and named Grand Master by the Science Fiction and Fantasy Writers of America in 2012.

“Wolfe, a celebrated science-fiction writer who died in 2019, stretched the genre’s boundaries in his rich and allusive work … Wolfe deploys sci-fi and gothic elements—an interplanetary portal, a sentient house that builds itself—to explore the question that lies at the heart of many of his novels: What does it mean to be human and alive?”—The New Yorker

“Wolfe fans will spend a lot of time discussing this. All the best detective stories have clues buried deep in them. You need to look back and check for the ones you missed. It’s an enigmatic final note from sci-fi’s most enigmatic author.”—The Wall Street Journal

“Ambitious, imaginative, and packed with twists and turns, Interlibrary Loan is a major achievement from a legendary writer gone too soon.”—Esquire.com

“Complex and clever, this last offering from Wolfe is sure to please sci-fi readers.”—Publishers Weekly

“A winding tale... that will have readers going back looking for details they missed the first time around. This posthumous sequel to A Borrowed Man blends a hard-boiled mystery style with a sf future.”—Library Journal

“If any writer from within genre fiction ever merited the designation Great Author, it is surely Wolfe . . . [who] reads like Dickens, Proust, Kipling, Chesterton, Borges, and Nabokov rolled into one.”—The Washington Post Book World

“One of the literary giants of science fiction.”—The Denver Post

“Gene Wolfe is as good a writer as there is today...I feel a little bit like a musical contemporary attempting to tell people what's good about Mozart.”—The Chicago Sun-Times

“Wolfe is a sophisticated stylist, and has more in common with writers such as Jorge Luis Borges than almost any science fiction writer both in terms of craft and themes.”—The Boston Globe

“Quite possibly the most important writer in the sf field.”—The Encyclopedia of Science Fiction