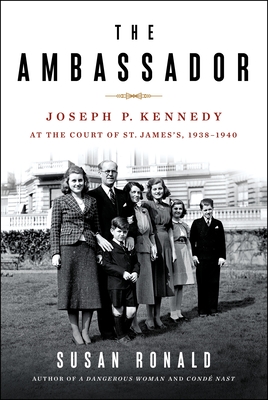 On February 18, 1938, Joseph P. Kennedy was sworn in as US Ambassador to the Court of St. James. To say his appointment to the most prestigious and strategic diplomatic post in the world shocked the Establishment was an understatement: known for his profound Irish roots and staunch Catholicism, not to mention his “plain-spoken” opinions and womanizing, he was a curious choice as Europe hurtled toward war.

Initially welcomed by the British, in less than two short years Kennedy was loathed by the White House, the State Department and the British Government. Believing firmly that Fascism was the inevitable wave of the future, he consistently misrepresented official US foreign policy internationally as well as direct instructions from FDR himself. The Americans were the first to disown him and the British and the Nazis used Kennedy to their own ends.

Through meticulous research and many newly available sources, Ronald confirms in impressive detail what has long been believed by many: that Kennedy was a Fascist sympathizer and an anti-Semite whose only loyalty was to his family's advancement. She also reveals the ambitions of the Kennedy dynasty during this period abroad, as they sought to enter the world of high society London and establish themselves as America’s first family. Thorough and utterly readable, The Ambassador explores a darker side of the Kennedy patriarch in an account sure to generate attention and controversy.

Born and raised in the United States, SUSAN RONALD is a British-American biographer and historian of eight books, including Conde Nast, The Ambassador, A Dangerous Woman, Hitler’s Art Thief, and Heretic Queen. She lives in rural England with her writer husband.

“Seldom has the Joe Kennedy story been told in such a searing, remorseless way as it is in Susan Ronald’s The Ambassador…she is equally deft at capturing the Kennedy conundrum as the difficulties mounted and the war clouds darkened.” --Wall Street Journal

"Ronald fashions a portrait of the ambitious Kennedy that brings to mind the mythological figure Icarus." --The Washington Post

“Using many newly available sources, Susan Ronald brings this pivotal point in history vividly to life in her meticulously researched The Ambassador.” –Bookpage

"Ronald surveys the vast network of politicos and lovers whose lives intersected with Kennedy during his eventful and disastrous diplomatic career." --Booklist

“Fans of popular history and biography should appreciate this addition to the ranks of books about the Kennedy family.” –Library Journal

"A well-researched history of an egotist who toyed with world affairs." --Kirkus Reviews

“Susan Ronald really delivers with The Ambassador...so steeped in intimate detail, it feels to me as if I were an eye witness to each decisive victory and each crushing defeat. I loved this.” –J. Randy Taraborrelli, bestselling author of The Kennedy Heirs and Jackie, Janet and Lee

“Susan Ronald has deftly removed the whitewash that has covered Joseph P. Kennedy's tenure as Ambassador to the Court of St. James and applied a stark coat of truth. The Ambassador is an indispensable book that will change forever the way we think about the Kennedy family.” –Laurence Leamer, bestselling author of The Kennedy Women: The Saga of an American Family

“Essential reading to understand the man who started a political dynasty. Kennedy is charming yet petty, gracious yet cocky, short-sighted yet strategic.” –Luke A. Nichter, bestselling author of The Last Brahmin: Henry Cabot Lodge Jr. and the Making of the Cold War

“Susan Ronald's lucid narrative of Joseph Kennedy's controversial role as American ambassador to Great Britain not only examines United States resources, but also enhances the story by reviewing a multitude of British documents that few have included, resolving any ambiguities [and] leaving the reader with the inescapable conclusion that The Ambassador was a Nazi and fascist appeaser as well as a blatant anti-Semite.” –Dr. Irwin F. Gellman, Pulitzer Prize-nominated author of Secret Affairs: Franklin Roosevelt, Cordell Hull, and Sumner Welles

“[Ronald] does an exceptional job of integrating the story of Nast’s personal fortunes and misfortunes and the lives of those he sought to refine and educate.” —Booklist

"A highly flattering biography of an important figure in American publishing." —Kirkus Reviews

"Ronald writes in a vivid, sparkling, amused style...and revels in the era’s repartee, clothes and gossip...her evocation of the vibrant scene around [Nast] will keep readers entertained." —Publishers Weekly

Praise for A Dangerous Woman:

“A lively picture of the world in which Florence moved, with all its intricate financial shenanigans, rivalrous investors and glittering social occasions.” —Wall Street Journal

“Ronald traces Gould’s amoral life and high-flying times…elegant and beautiful, she used sex and charm as her currency, trading them for favors and luxuries that let her sail through the war years unscathed." —New York Post