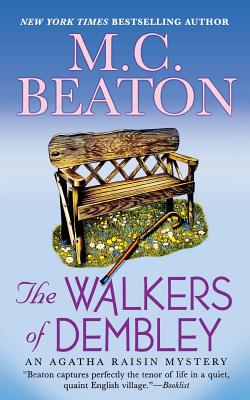 This is book number 4 in the Agatha Raisin Mysteries series.

After six months in London, Agatha Raisin returns to her beloved Cotswold village—and her dashing neighbor, James Lacey. Well, sort of. James might not be so interested in Agatha. But soon enough, Agatha becomes consumed by her other passion: crime-solving. A woman has been found dead in a lonely field nearby. Her name is Jessica Tartinck, a hiker who infuriated wealthy landowners by insisting on her hiking club's right to trek across their properties.

Now it's up to Agatha, with James's help, to launch an investigation. Together, they will follow no shortage of leads; many of Jessica's fellow Dembley walkers seem all too willing and able to commit murder. But the trail of a killer is as easy to lose as your heart—and your life. So Agatha and James had better watch their every step. . . in The Walkers of Dembley, the fourth book in M.C. Beaton's bestselling series.

“Beaton has a winner in the irrepressible, romance-hungry Agatha.” —Chicago Sun-Times

“Among writers of cozy village mystery series, count M.C. Beaton as one who creates a nice tea party.” —Associated Press