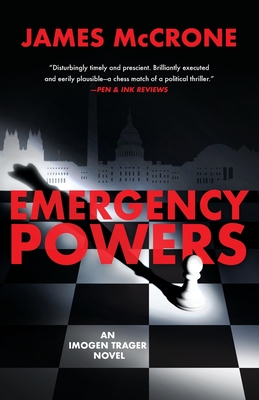 The accidental president is no accident.

When the president dies in office, FBI Agent Imogen Trager knows that the conspiracy she chased down a blind alley still has life in it-and she needs to get back in the hunt. The old case may be the key to stopping a brutal, false flag terrorist attack meant to finalize the new puppet president's grip on power. Imogen doesn't know it yet, but she's running out of time.

As bodies pile up and leads go cold, the main target from that old case reaches out to her. He's still at large, and now he needs protection. Imogen doesn't trust him, and it's not only because he's offering intel that sounds too good to be true. He's already tried to kill her once.

Set variously in DC, Seattle and small-town America, Emergency Powers is a story of corruption and redemption, achieved at enormous personal cost, with a ripped-from-the-headlines feel: a fractious FBI, an undermined Attorney General, powerful people using all manner of treachery to maintain their hold on power. But it's more than headlines about things people think they know. And darker.