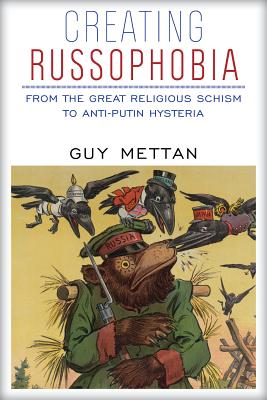 By Guy Mettan
Please email or call us for pricing on this book.

Why do the USA, UK and Europe so hate Russia? How is it that Western antipathy, once thought due to anti-Communism, could be so easily revived over a crisis in distant Ukraine, against a Russia no longer communist? Why does the West accuse Russia of empire-building, when 15 states once part of the defunct Warsaw Pact are now part of NATO, and NATO troops now flank the Russian border?
These are only some of the questions Creating Russophobia iinvestigates. Mettan begins by showing the strength of the prejudice against Russia through the Western response to a series of events: the Uberlingen mid-air collision, the Beslan hostage-taking, the Ossetia War, the Sochi Olympics and the crisis in Ukraine. He then delves into the historical, religious, ideological and geopolitical roots of the detestation of Russia in various European nations over thirteen centuries since Charlemagne competed with Byzantium for the title of heir to the Roman Empire. Mettan examines the geopolitical machinations expressed in those times through the medium of religion, leading to the great Christian schism between Germanic Rome and Byzantium and the European Crusades against Russian Orthodoxy. This history of taboos, prejudices and propaganda directed against the Orthodox Church provides the mythic foundations that shaped Western disdain for contemporary Russia. From the religious and imperial rivalry created by Charlemagne and the papacy to the genesis of French, English, German and then American Russophobia, the West has been engaged in more or less violent hostilities against Russia for a thousand years. Contemporary Russophobia is manufactured through the construction of an anti-Russian discourse in the media and the diplomatic world, and the fabrication and demonization of The Bad Guy, now personified by Vladimir Putin. Both feature in the meta-narrative, the mythical framework of the ferocious Russian bear ruled with a rod of iron by a vicious president. A synthetic reading of all these elements is presented in the light of recent events and in particular of the Ukrainian crisis and the recent American elections, showing how all the resources of the West's soft power have been mobilized to impose the tale of bad Russia dreaming of global conquest.