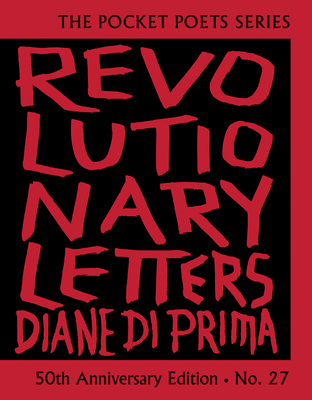 By turns a handbook of countercultural living, a manual for street protest, and a feminist broadside against the repressive state apparatus, Revolutionary Letters is a modern classic, as relevant today as it was fifty years ago. In 1968, visionary poet Diane di Prima moved from Beat New York to hippie San Francisco to begin these "letters," poems filled with a blend of utopian imagination, radical politics, and ecological awareness. Immersed in alternative histories and mystical traditions, the poems were catapulted into the world through underground newspapers and free pamphlets, circulating far and wide. In 1971, Lawrence Ferlinghetti published the first of four ever-expanding book versions in the Pocket Poets Series. In her last years, di Prima oversaw the final iteration of this lifelong project, adding poems written between 2007 and her death in 2020. This 50th Anniversary edition marks the long-awaited return of Revolutionary Lettersto City Lights.

"There is a generosity and affection in Revolutionary Letters that I find myself returning to, always, when I'm at my most cynical and feeling lost for any understanding of what a better world might look like. When I need to be grounded and re-centered in my understanding of community care as a living, breathing, full-time mission. And, quite simply, when I need to be reminded of how language can begin on the page, and echo far beyond."--Hanif Abdurraqib

"What's astonishing about Diane di Prima's Revolutionary Letters is how these poems are adamantly useful. A manual of insurgent instruction, these poems tell you how to mitigate tear gas and sleep deprivation, eat a healthy diet, and overthrow the state. This book is ever more urgent in our moment, as a resurgent left faces down the apocalypse. Revolutionary Letters is a time machine towards a better future."--Ken Chen

"With this new and expanded edition we are offered a window onto a master poet redefining revolution over her lifetime. Di Prima continues to interrogate the ways in which we have been taught to live, love, eat, write, fight and take control. How can we make the most of this book and its wisdom? It's not enough to simply read it or even to write our own Revolutionary Letters. These poems are not realized until we are called upon to act."--Cedar Sigo

"How do 'we' keep fighting? There is no one way, but sometimes you think about lines in Diane di Prima's Revolutionary Letters. Di Prima's 'letters' feel like they were written to the all of you that always is somewhere coming together. And here you thought this classic couldn't get any better."--Wendy Trevino

Feminist Beat poet Diane di Prima was born in Brooklyn, New York. She attended Swarthmore College for two years before moving to Greenwich Village in Manhattan and becoming a writer in the emerging Beat movement. There, she developed friendships with poets Amiri Baraka, Allen Ginsberg, Jack Kerouac, Frank O'Hara, and Audre Lorde. After joining Timothy Leary's intentional community in upstate New York, she moved to San Francisco in 1968.Di Prima's poetry mixes stream-of-consciousness with attention to form and joins politics to spiritual practice. In an interview with Jacket magazine, di Prima spoke about her life as a writer, a mother, and an activist. I wanted everything--very earnestly and totally--I wanted to have every experience I could have, I wanted everything that was possible to a person in a female body, and that meant that I wanted to be mother.... So my feeling was, 'Well'--as I had many times had the feeling--'Well, nobody's done it quite this way before but fuck it, that's what I'm doing, I'm going to risk it.'Di Prima had published more than 40 books. Her poetry collections include This Kind of Bird Flies Backwards (1958), Revolutionary Letters (1971, expanded 2021), the long poem;Loba (1978, expanded 1998), and Pieces of a Song: Selected Poems (2001). She is also the author of the short story collection Dinners and Nightmares (1960), the semi-autobiographical Memoirs of a Beatnik (1968), and the memoir Recollections of My Life as a Woman: The New York Years (2001).With Amiri Baraka, she co-edited the literary magazine The Floating Bear from 1961 to 1969. She co-founded the Poets Press and the New York Poets Theatre and founded Eidolon Editions and the Poets Institute. A follower of Buddhism, she also co-founded the San Francisco Institute of Magical and Healing Arts.Di Prima was named Poet Laureate of San Francisco in 2009. She has been awarded the National Poetry Association's Lifetime Service Award and the Fred Cody Award for Lifetime Achievement and had also received grants from the National Endowment for the Arts, the Committee on Poetry, the Lapis Foundation, and the Institute for Aesthetic Development. St. Lawrence University granted her an honorary doctorate.She had taught at the Jack Kerouac School of Disembodied Poetics at the Naropa Institute, the California College of Arts and Crafts, and in the Masters-in-Poetics program at the New College of California. Selections of her papers are held at the University of Louisville, Indiana University, Southern Illinois University, and the University of North Carolina at Chapel Hill's libraries. Di Prima lived in Northern California.She passed away on October 25th, 2020.