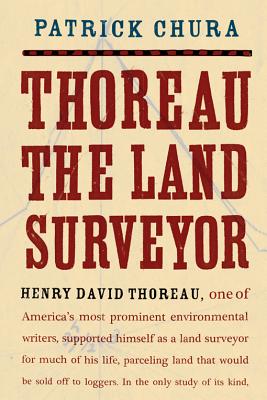 By Patrick Chura
Email or call for price

"An insightful study of how Thoreau's profession as a surveyor impacts his environmental sensibility and informs his literary works; further, Chura shows that the manuscript surveys and corresponding field notes are themselves worthy of literary analysis. "--Sandra Harbert Petrulionis, coeditor of More Day to Dawn: Thoreau's Walden for the Twenty-first Century

"Chura's thorough understanding of the cultural import and physical practice of 19th-century surveying provides a fresh and interesting perspective on Thoreau's life and works. . . . .He combines a spry writing style with meticulous research in this delightful book, which introduces readers to another side of Thoreau's life and thought. Highly recommended." --G. D. MacDonald, Virginia State University

"Most books about Henry David Thoreau focus on his writing, philosophy, or literary vision, paying little attention to how he made a living while engaged in such transcendentalist pursuits. In Thoreau the Land Surveyor, Patrick Chura corrects this oversight." --Lorianne DiSabato, The New England Quarterly

"A scholarly book that's as beautiful as it is unput-downable. . . Not only is Chura a fine writer here, he is one heck of a historian. He enriches every page with carefully considered research. . . .I loved this book from start to finish." --Mike Tidwell, author of The Ponds of Kalambayi: An African Sojourn.

"An insightful study of how Thoreau's profession as a surveyor impacts his environmental sensibility and informs his literary works; further, Chura shows that the manuscript surveys and corresponding field notes are themselves worthy of literary analysis.

"This book on the significance of land surveying to Henry Thoreau's writing is one that we have long needed. Chura's practical experience as a surveyor combined with his literary scholarship makes him the perfect person to write it."--Richard J. Schneider, editor ofHenry David Thoreau: A Documentary Volume

Henry David Thoreau, one of America's most prominent environmental writers, supported himself as a land surveyor for much of his life, parceling land that would be sold off to loggers. In the only study of its kind, Patrick Chura analyzes this seeming contradiction to show how the best surveyor in Concord combined civil engineering with civil disobedience.

Placing Thoreau's surveying in historical context, Thoreau the Land Surveyor explains the cultural and ideological implications of surveying work in the mid-nineteenth century. Chura explains the ways that Thoreau's environmentalist disposition and philosophical convictions asserted themselves even as he reduced the land to measurable terms and acted as an agent for bringing it under proprietary control. He also describes in detail Thoreau's 1846 survey of Walden Pond. By identifying the origins of Walden in--of all places--surveying data, Chura re-creates a previously lost supporting manuscript of this American classic.

Patrick Chura is associate professor of English at the University of Akron and author of Vital Contact: Downclassing Journeys in American Literature from Herman Melville to Richard Wright.