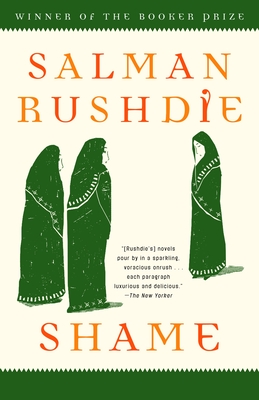 By Salman Rushdie
Please email or call us for pricing on this book.

The novel that set the stage for his modern classic, The Satanic Verses, Shame is Salman Rushdie’s phantasmagoric epic of an unnamed country that is “not quite Pakistan.” In this dazzling tale of an ongoing duel between the families of two men–one a celebrated wager of war, the other a debauched lover of pleasure–Rushdie brilliantly portrays a world caught between honor and humiliation–“shamelessness, shame: the roots of violence.” Shame is an astonishing story that grows more timely by the day.

Salman Rushdie is the author of fourteen previous novels, including Midnight’s Children (for which he won the Booker Prize and the Best of the Booker), Shame, The Satanic Verses, The Moor’s Last Sigh, and Quichotte, all of which have been shortlisted for the Booker Prize; a collection of stories, East, West; a memoir, Joseph Anton; a work of reportage, The Jaguar Smile; and three collections of essays, most recently Languages of Truth. His many awards include the Whitbread Prize for Best Novel, which he won twice; the PEN/Allen Foundation Literary Service Award; the National Arts Award; the French Prix du Meilleur Livre Étranger; the European Union’s Aristeion Prize for Literature; the Budapest Grand Prize for Literature; and the Italian Premio Grinzane Cavour. He is a member of the American Academy of Arts and Letters and a fellow of the American Academy of Arts and Sciences, and he is a Distinguished Writer in Residence at New York University. He is a former president of PEN America. His books have been translated into over forty languages.

“Rushdie’s novels pour by in a sparkling, voracious onrush...each paragraph luxurious and delicious.” --The New Yorker

“There can seldom have been so robust and baroque an incarnation of the political novel as Shame. It can be read as a fable, polemic, or excoriation; as history or as fiction.... This is the novel as myth and as satire.” --Sunday Telegraph

“Shame is and is not about Pakistan, that invented, imaginary country, ‘a failure of the dreaming mind.’... Rushdie shows us with what fantasy our sort of history must now be written—if, that is, we are to penetrate it, and perhaps even save it.” --The Guardian

“Swift in Gulliver’s Travels, Voltaire in Candide, Sterne in Tristram Shandy...Rushdie, it seems to me, is very much a latter-day member of their company.” --The New York Times Book Review

“A pitch-black comedy of public life and historical imperatives.” --The Times (UK)