A Fire Upon The Deep (Zones of Thought #1) (Mass Market) 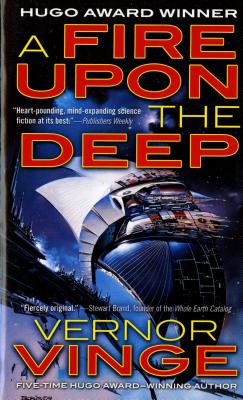 This is book number 1 in the Zones of Thought series.

“Vinge is one of the best visionary writers of SF today.” —David Brin

Thousands of years in the future, humanity is no longer alone in a universe where a mind's potential is determined by its location in space, from superintelligent entities in the Transcend, to the limited minds of the Unthinking Depths, where only simple creatures, and technology, can function. Nobody knows what strange force partitioned space into these "regions of thought," but when the warring Straumli realm use an ancient Transcendent artifact as a weapon, they unwittingly unleash an awesome power that destroys thousands of worlds and enslaves all natural and artificial intelligence.

Fleeing this galactic threat, Ravna crash lands on a strange world with a ship-hold full of cryogenically frozen children, the only survivors from a destroyed space-lab. They are taken captive by the Tines, an alien race with a harsh medieval culture, and used as pawns in a ruthless power struggle.

Vernor Vinge is the multi Hugo Award-winning author of A Fire Upon the Deep, A Deepness in the Sky, and Rainbow’s End. Known for his rigorous hard-science approach to his science fiction, he became an iconic figure among cybernetic scientists with the publication in 1981 of his novella "True Names," which is considered a seminal, visionary work of Internet fiction. His many books also include Marooned in Realtime and The Peace War.

Born in Waukesha, Wisconsin and raised in Central Michigan, Vinge is the son of geographers. Fascinated by science and particularly computers from an early age, he has a Ph.D. in computer science, and taught mathematics and computer science at San Diego State University for thirty years. He has gained a great deal of attention both here and abroad for his theory of the coming machine intelligence Singularity. Sought widely as a speaker to both business and scientific groups, he lives in San Diego, California.

“Fleeing a menace of galactic proportions, a spaceship crashes on an unfamiliar world, leaving the survivors--a pair of children--to the not-so-tender mercies of a medieval, lupine race. Responding to the crippled ship's distress signal, a rescue mission races against time to retrieve the children and recover the weapon they need to prevent the universe from being changed forever. Against a background depicting a space-time continuum stratified into 'zones of thought,' the author has created a rarity--a unique blend of hard science, high drama, and superb storytelling.” —Library Journal

“A tale that burns with the brazen energy of the best space operas of the golden age. Vinge has created a galaxy for the readers of the '90s to believe in...immense, ancient, athrum with data webs, dotted with wonders.” —John Clute, Interzone

“The first grand SF I've read in ages...Vinge is one of the best visionary writers of SF today.” —David Brin, author of Earth

“Fiercely original...Compelling ideas in the book include problems and advantages of group mind, galactic communications turbidity, and the prospect of civilizations aspiring to godhood.” —Stewart Brand, founder of the Whole Earth Catalog