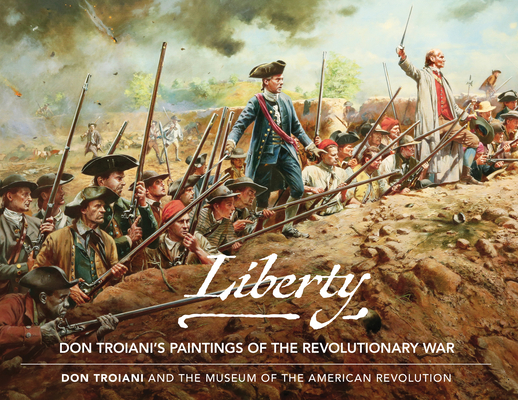 By Don Troiani (Artist), The Museum of the American Revolution
$29.95

Using a masterful combination of "artistry and accuracy" (New York Times), nationally renowned historical artist Don Troiani has dedicated much of his career to transforming the modern understanding of what the Revolutionary War truly looked like. His research-based paintings capture the reality and drama of crucial moments such as the 1775 Battle of Bunker Hill, General Washington's daring 1776 attack on Trenton, and the American and French victory at Yorktown in 1781. Liberty: Don Troiani's Paintings of the Revolutionary War, the book that serves as catalog for the exhibit of Troiani's work at the Museum of the American Revolution, highlights the most pivotal events of America's fight for independence and reveals Troiani's research-based artistic process. For the first time in a museum, this special exhibition brings together over forty of Troiani's original Revolutionary War paintings and pairs them with forty artifacts from his personal collection, that of the Museum, and several private collectors. https: //www.amrevmuseum.org/exhibits/liberty-or-death-don-troiani-s-paintings-of-the-revolutionary-war The exhibit and the book unveil Troiani's latest canvas, a painting of the young African American sailor and Philadelphian James Forten witnessing Black and Native American troops in the ranks of the Continental Army as they march past Independence Hall on their way to Yorktown, Virginia.The painting was commissioned in 2019 by the Museum with funding provided by the Washington-Rochambeau Revolutionary Route National Historic Trail of the National Park Service. The exhibit will be open from October 16, 2021 to September 5, 2022.

Don Troiani is well known for his extremely accurate historical and military paintings, scenes of great characters and grand action that have defined America's military heritage. An expert researcher with an extensive library and impressive private artifact study collections of Civil War, War of 1812, Revolutionary War, and World War II uniforms, equipage, insignia, and weapons, he has served as a consultant on films, including Cold Mountain and Night at the Museum 3, and television programs. His work has appeared in many publications and is represented in the collections of numerous museums, including the Smithsonian's Museum of History and Technology, the U.S. Marine Corps Museum, and the National Museum of African American History and Culture. His ten books published over the last twenty-five years and still in print have sold more than 200,000 copies. He lives in Southbury, Connecticut. The Museum of the American Revolution, in Philadelphia, Pennsylvania, uncovers and shares compelling stories about the diverse people and complex events that sparked America's ongoing experiment in liberty, equality, and self-government. Through the Museum's unmatched collection, immersive galleries, powerful theater experiences, and interactive elements, visitors gain a deeper appreciation for how this nation came to be and feel inspired to consider their role in ensuring that the promise of the American Revolution endures. For more information, visit https: //www.amrevmuseum.org/exhibits/liberty-or-death-don-troiani-s-paintings-of-the-revolutionary-war