Vatican Code: American Diplomacy in the Time of Francis (Hardcover) 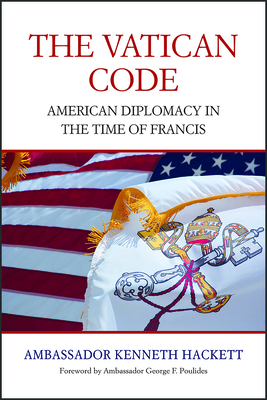 There are many who are intrigued by the institution of the Holy See under the pontificate of Pope Francis. The Vatican Code opens a curtain to the Holy See from a unique angle. It browses some of the highlights of the papacy from 2013 to 2017 as well as some of its murkier elements. It profiles some of the personalities and the daily and long-term innerworkings of the United States Embassy with the Vatican. The Vatican Code provides key insights into the sensitive negotiations of an American ambassador to the Holy See and will help readers understand the intricacies of this unique role.

Ambassador Kenneth Hackett was born and raised in Boston, educated by the Jesuits at Boston College High School and Boston College. He did graduate study at New York University and took a sabbatical at the University of South Carolina. Following three and a half years with the Peace Corps in Ghana, he spent forty years with Catholic Relief Services (CRS), nineteen of which he was the chief executive officer and president. He was appointed as United States ambassador to the Holy See in August 2013.

Ambassador Hackett holds nineteen honorary degrees from various Catholic universities and was awarded the Laetare Medal from the University of Notre Dame. He has received two papal awards: the Order of Pius IX and the Equestrian Order of St. Gregory (Knight Commander).

"Without being weighed down by the baggage of 'national interests, ' the Holy See is in a unique position globally to bridge ideological divides and bring together warring combatants. Pope Francis's efforts to improve life for ordinary people throughout the world can teach us all the value of remaining open and empathic to those with different beliefs, but that diplomacy should also have an unflinching moral basis." --from the foreword

"The Vatican Code offers an illuminating view into Ambassador Hackett's time as U.S. ambassador to the Holy See. Grounded in his decades of global humanitarian work through Catholic Relief Services, Ambassador Hackett brings an insightful and deeply thoughtful lens to his retelling of his years in his diplomatic role, and the unique ways in which the Vatican can serve as a voice and advocate for the most vulnerable members of our global community." --Dr. John J. DeGioia, president of Georgetown University

"In The Vatican Code, Ken Hackett shares with us his experience as U.S. ambassador to the Holy See. We also glimpse the man who occupied that important and not infrequently challenging office. He undertook his mission in the same spirit of service that has animated him throughout a long career of engagement with Catholic institutions. Ken's witness is to be welcomed." --Archbishop Paul R. Gallagher, secretariat of state-Section for Relations with States +