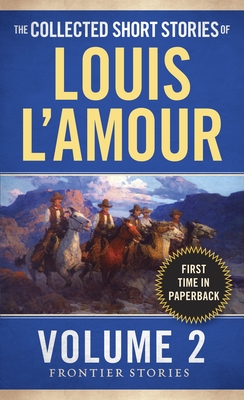 This is book number 2 in the Frontier Stories series.

In paperback for the first time, this second volume of Louis L’Amour’s collected stories showcases thirty more classic tales of the American frontier. Inside you will find the stories of heroism, honor and sacrifice that L’Amour made uniquely his own: like that of a young man sent out alone into a blizzard to face a deadly stampede, or a lawman who finds the bullet-riddled body of an infamous Mexican bandit and knows duty demands he track down a far more dangerous predator. Featuring  L’Amour’s signature stories of Texas Ranger Chick Bowdrie, this collection captures men and women at the crossroads of friendship and suspicion, loyalty or betrayal.

Our foremost storyteller of the American West, Louis L’Amour has thrilled a nation by chronicling the adventures of the brave men and woman who settled the frontier. There are more than three hundred million copies of his books in print around the world.

"L'Amour never writes with less than a saddle creak in his sentences and more often with a desert heatwave boiling up from a sunbaked paragraph. A master storyteller.... for reading under the stars."—Kirkus Reviews