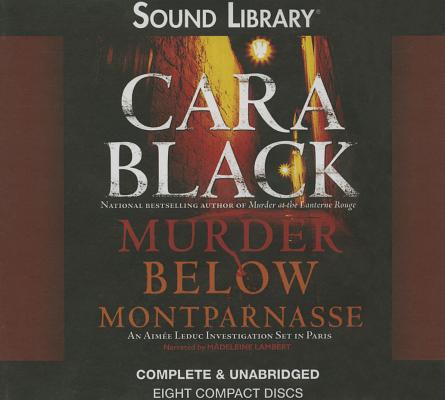 By Cara Black, Madeleine Lambert (Read by)
Please email or call us for pricing on this book.

A long-lost Modigliani portrait, a grieving brother's blood vendetta, a Soviet secret that's been buried for eighty years-Parisian private investigator Aimee Leduc's current case is her most exciting one yet.

When Aimee's long-term partner and best friend Rene leaves their detective agency for a new job in Silicon Valley, Aimee knows she can handle the extra workload. At least, that what she tells herself ... repeatedly.

But all bets are off when Yuri Volodya, a mysterious old Russian man, hires Aimee to protect a painting. By the time she gets to his Montparnasse atelier, the precious painting has already been stolen, leaving Aimee smelling a rat. The next day, Yuri is found tortured to death in his kitchen. To top it all off, it looks like Aimee isn't the only one looking for the painting. Some very dangerous people are threatening her and her coworkers, and witnesses are dropping like flies. Now Aimee has to find the painting, stop her attackers, and figure out what her long-missing mother, who is on Interpol's most wanted list, has to do with all this-fingers crossed she wasn't Yuri's murderer, despite clues pointing in that direction.

Cara Black is the author of ten previous books in the bestselling Aimee Leduc series. She lives in San Francisco with her husband and son and visits Paris frequently.