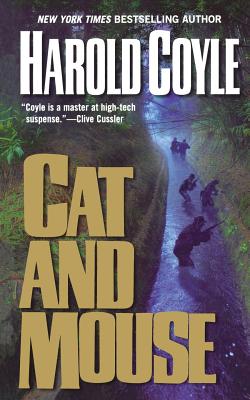 New York Times bestselling author Harold Coyle's Cat and Mouse reveals the chaos of warfare as Islamic terrorists, lead by their most charismatic leader to date, form a powerful coalition in hopes of breaking America's will to continue the war on terror

In the War on Terror, it is often difficult to tell who the enemy is. Sometimes your fiercest opponent isn't an insurgent or a fanatic bent on making a statement in blood, but a chain of command that is pursuing goals and objectives that have nothing to do with your unit's stated mission. Nathan Dixon finds out just how true this is when a new battalion commander, Lieutenant Colonel Robert Delmont, convinces his superiors that he has an all but foolproof plan for defeating Islamic terrorists in the Philippines—a plan that will ensure Delmont's promotion to full colonel and beyond.

But the 3rd Regiment of the 75th Ranger battalion is pitted against no fool. Determined to create a fundamental Islamic state in Southeast Asia, a charismatic terrorist by the name of Hamdani Summirat unites the various Islamic factions into a confederation. Their aim is to drag the United States into a protracted war of attrition that the Americans cannot win. Summirat's factions play out a deadly game of cat and mouse, drawing the American forces into ambushes and small, bloody encounters with a small but highly trained core of Islamic fighters.

Lieutenant General Scott Dixon, Deputy Chief of Staff for Operations with the US Army--and Nathan's father—soon finds that these enemies are practically impossible to hunt down. They are killing American troops almost at will. He realizes quickly that if the mission continues, many more Americans will be wounded or killed-- perhaps even his own son. But his pleas to his Commander-in-Chief are practically ignored.

This dual game of cat and mouse is played out both in the jungles of Mindanae and in the forward operations base. Nathan Dixon must deal with a battalion commander who is determined to see his plan through, regardless of the price Nathan and his company must pay, while Scott Dixon must deal with a chain of command that refuses to alter a plan of attack in the face of a losing effort.

New York Times bestselling author, Harold Coyle is a graduate of the Virginia Military Institute and spent fourteen years on active duty with the U.S. Army. His books include No Warriors, No Glory and They Are Soldiers. He lives in Leavenworth, Kansas.

“Coyle is best when he's depicting soldiers facing death . . . He knows soldiers and and he understands the brotherhood of arms mystique and transcends national boundaries.” —The New York Times