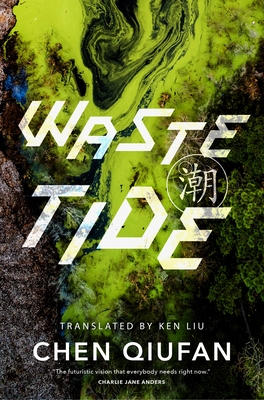 Award-winning author Chen Qiufan's Waste Tide is a thought-provoking vision of the future.

Mimi is drowning in the world's trash.

She’s a waste worker on Silicon Isle, where electronics -- from cell phones and laptops to bots and bionic limbs — are sent to be recycled. These amass in towering heaps, polluting every spare inch of land. On this island off the coast of China, the fruits of capitalism and consumer culture come to a toxic end.

Mimi and thousands of migrant waste workers like her are lured to Silicon Isle with the promise of steady work and a better life. They're the lifeblood of the island’s economy, but are at the mercy of those in power.

A storm is brewing, between ruthless local gangs, warring for control. Ecoterrorists, set on toppling the status quo. American investors, hungry for profit. And a Chinese-American interpreter, searching for his roots.

As these forces collide, a war erupts -- between the rich and the poor; between tradition and modern ambition; between humanity’s past and its future.

Mimi, and others like her, must decide if they will remain pawns in this war or change the rules of the game altogether.


"An accomplished eco-techno-thriller with heart and soul as well as brain. Chen Qiufan is an astute observer, both of the present world and of the future that the next generation is in danger of inheriting." – David Mitchell, New York Times bestselling author of Cloud Atlas

Chen Qiufan is an award-winning science fiction writer. He grew up near Guiyu, China, home to the world’s largest e-waste recycling center, an area the UN called an “environmental calamity.” His experiences there inspired the Waste Tide. He currently lives in Shanghai and Beijing and works as the founder of Thema Mundi Studio.

Ken Liu is an award-winning author of speculative fiction. His books include the Dandelion Dynasty series (The Grace of Kings), The Paper Menagerie and Other Stories, The Hidden Girl and Other Stories, and the Star Wars tie-in novel, The Legends of Luke Skywalker. He frequently speaks at conferences and universities on topics like futurism, cryptocurrency, the mathematics of origami, and more. He lives near Boston with his family.

"An accomplished eco-techno-thriller with heart and soul as well as brain. Chen Qiufan is an astute observer, both of the present world and of the future that the next generation is in danger of inheriting." – David Mitchell, New York Times bestselling author of Cloud Atlas and The Bone Clocks

"Something startlingly new... an action-packed story that's full of moral complexity. This is the futuristic vision that everybody needs right now." —Charlie Jane Anders, author of All the Birds in the Sky

"Chen weaves a stunning tale of greed and deftly exposes all the hidden contours of the human heart." —Maggie Shen King, author of An Excess Male

“Filled with wonderful invention, compelling characters and a whirlpool of story, Waste Tide is an urgently-needed, thought-provoking wild ride of a novel. I couldn’t put it down.” – Lavie Tidhar, author of Central Station

"Already an award winner in China, this book is likely to draw comparisons to Cixin Liu's The Three Body Problem and Kim Stanley Robinson's New York 2140 and is a provocative addition to the growing corpus of Chinese speculative fiction and near-future and realist sf as a whole." —Library Journal

“A complex and provocative exploration of the interactions among social class, corporate ambition, cultural identity, environmentalism, and human potential, with enough buzzy ideas to power a couple of novels, and enough violent melodrama to keep the reader plummeting along.” —Gary K. Wolfe for Locus

"A chilling sci-fi novel about class war and trash in near-future China, and the people the world’s economy leaves behind... Pressingly relevant." —The Verge