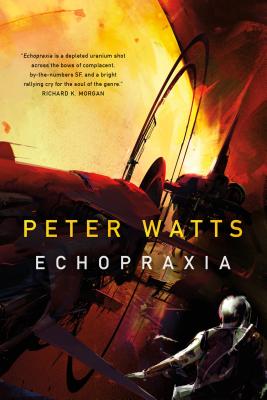 This is book number 2 in the Firefall series.

Prepare for a different kind of singularity in Peter Watts' Echopraxia, the follow-up to the Hugo-nominated novel Blindsight.

It's the eve of the twenty-second century: a world where the dearly departed send postcards back from Heaven and evangelicals make scientific breakthroughs by speaking in tongues; where genetically engineered vampires solve problems intractable to baseline humans and soldiers come with zombie switches that shut off self-awareness during combat. And it's all under surveillance by an alien presence that refuses to show itself.

Daniel Bruks is a living fossil: a field biologist in a world where biology has turned computational, a cat's-paw used by terrorists to kill thousands. Taking refuge in the Oregon desert, he's turned his back on a humanity that shatters into strange new subspecies with every heartbeat. But he awakens one night to find himself at the center of a storm that will turn all of history inside-out.

Now he's trapped on a ship bound for the center of the solar system. To his left is a grief-stricken soldier, obsessed by whispered messages from a dead son. To his right is a pilot who hasn't yet found the man she's sworn to kill on sight. A vampire and its entourage of zombie bodyguards lurk in the shadows behind. And dead ahead, a handful of rapture-stricken monks takes them all to a meeting with something they will only call "The Angels of the Asteroids."

Their pilgrimage brings Dan Bruks, the fossil man, face-to-face with the biggest evolutionary breakpoint since the origin of thought itself.

His work is available in 21 languages, has appeared in over 350 best-of-year anthologies, and been nominated for over 50 awards in a dozen countries. His (somewhat shorter) list of 20 actual wins includes the Hugo, the Shirley Jackson, and the Seiun.

Peter is the author of the Rifters novels (Starfish, Maelstrom) and the Firefall series (Blindsight, Echopraxia).