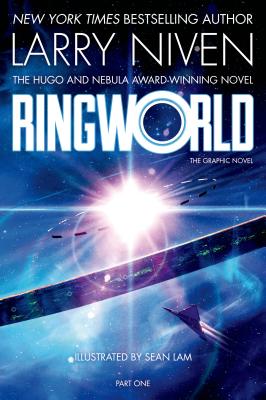 A modern science fiction classic, Larry Niven's Ringworld won the Hugo and Nebula Awards for best novel in 1970. Now this SF classic is adapted into a thrilling manga adventure by Robert Mandell and Sean Lam.

In Ringworld: The Graphic Novel, Part One, two-hundred-year-old human Louis Wu is recruited by a two-headed alien named Nessus to join him, a catlike warrior alien named Speaker, and the infinitely lucky human Teela Brown to explore an alien artifact.

They find a Ringworld, a ribbon millions of miles long built around a distant sun. The civilization has fallen into savagery, though, and after crashing into the Ringworld, Louis must come up with a clever plan to get back to known space, hundreds of light years away.

Larry Niven is the award-winning author of the Ringworld series, along with many other science fiction masterpieces and fantasy including the Magic Goes Away series. His Beowulf's Children, co-authored with Jerry Pournelle and Steven Barnes, was a New York Times bestseller. He has received the Nebula Award, five Hugos, four Locus Awards, two Ditmars, the Prometheus, and the Robert A. Heinlein Award, among other honors. He lives in Chatsworth, California.

ROBERT MANDELL is the creator and co–writer for the bestselling series, Avalon: Web of Magic. Animated television credits include The King and I, Ace Ventura, Pet Detective (Executive Producer), among others.

SEAN LAM is an artist/illustrator who lives in Singapore and is best known for doing the art for It Takes a Wizard. He also illustrated the graphic novel adaptation of Ringworld by Larry Niven.

“His tales have pulse-pounding narrative drive. Niven is a true master!” —Frederik Pohl

“Excellent and entertaining...woven together very skillfully and proceed[ing] at a pretty smooth pace.” —Algis Budrys on Ringworld

“This rousing sequel to the classic Ringworld continues the adventures of Louis Wu and Speaker-to-Animals on that fantastic planet.” —School Library Journal on The Ringworld Engineers; also selected as An ALA Best Book for Young Adult