When Gravity Fails: The Classic of Cyberpunk SF (The Audran Sequence #1) (Paperback) 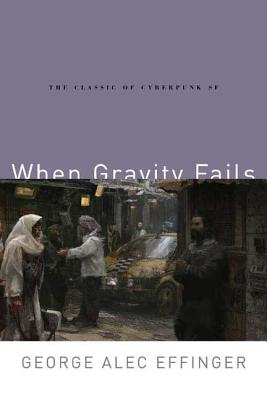 This is book number 1 in the The Audran Sequence series.

In a decadent world of cheap pleasures and easy death, Marid Audrian has kept his independence the hardway. Still, like everything else in the Budayeen, he's available…for a price.

For a new kind of killer roams the streets of the Arab ghetto, a madman whose bootlegged personality cartridges range from a sinister James Bond to a sadistic disemboweler named Khan. And Marid Audrian has been made an offer he can't refuse.

The 200-year-old "godfather" of the Budayeen's underworld has enlisted Marid as his instrument of vengeance. But first Marid must undergo the most sophisticated of surgical implants before he dares to confront a killer who carries the power of every psychopath since the beginning of time.

Wry, savage, and unignorable, When Gravity Fails was hailed as a classic by Effinger's fellow SF writers on its original publication in 1987, and the sequence of "Marid Audrian" novels it begins were the culmination of his career.

A winner of the Hugo and Nebula Awards, George Alec Effinger is the author of What Entropy Means to Me, Schrodinger's Kitten, and the Marîd Audran sequence that begins with When Gravity Fails. He died in 2002.

“Like a dive into the eye of a storm.” —The Washington Post Book World on When Gravity Fails

“Ingenious, layered, sophisticated, and consistently bloodcurdling, When Gravity Fails kept me awake long after I had finished reading it.” —Spider Robinson

“Great entertainment...Places Effinger in the company of writers like Gibson.” —Fantasy Review on When Gravity Fails

“Superior science fiction . . . among the best I've come across.” —The Denver Post on When Gravity Fails

“A brilliantly written, knife-edged futuristic detective story . . . destined to be the year's most intense and emotionally involving SF work.” —Houston Post on When Gravity Fails

“Wry and black and savage... there's a knife behind every smile.” —George R. R. Martin on When Gravity Fails

“Muscular, convincing, yet continuously surprising.” —Richard A. Lupoff on When Gravity Fails

“One of the best cyberpunk novels I've read . . . Effinger's prose is terse, direct, vivid and often laced with an enchanting sense of humor . . . this is only part of the book's delightful texture . . . gives you a real sense of what it's like to be an old-fashioned gumshoe in the seedy backreaches of a futuristic arab nation.” —The Providence Sunday Journal on When Gravity Fails

“This is the fourth or fifth time I've been asked to give a public comment on an Effinger book; and each time I've done it; and each time I've said you people are cheating yourselves if you don't forego food and rent to pick up on Effinger's work. Now, *this* time, will you for pete's sake listen to me and buy When Gravity Fails? It's as crazy as a spider on ice skates, plain old terrific; and if you don't pay attention I'll have to get tough with you! We have your childen and your dog. Buy, read and marvel...or else.” —Harlan Ellison on When Gravity Fails