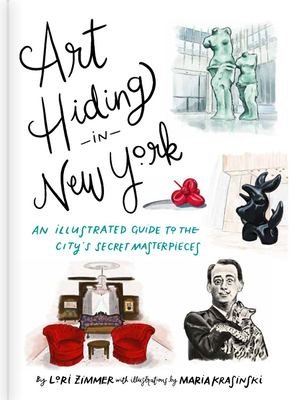 Uncover the artistic masterworks hidden across New York City in this charmingly illustrated exploration of one of the world's greatest creative treasure troves.

There's so much to love about New York, and so much to see. The city is full of art, and architecture, and history -- and not just in museums. Hidden in plain sight, in office building lobbies, on street corners, and tucked into Soho lofts, there's a treasure trove of art waiting to be discovered, and you don't need an art history degree to fall in love with it.

Art Hiding in New York is a beautiful, giftable book that explores all of these locations, traversing Manhattan to brings 100 treasures to art lovers and intrepid New York adventurers. Curator and urban explorer Lori Zimmer brings readers along to sites covering the biggest names of the 20th century -- like Jean-Michel Basquiat's studio, iconic Keith Haring murals, the controversial site of Richard Serra's Tilted Arc, Roy Lichtenstein's subway station commission, and many more. Each entry is accompanied by a beautiful watercolor depiction of the work by artist Maria Krasinski, as well as location information for those itching to see for themselves. With stunning details, perfect for displaying on any art lover's shelf, and curated itineraries for planning your next urban exploration, this inspirational book is a must-read for those who love art, New York, and, of course, both.

Lori Zimmer is a New York-based curator, writer and author of The Art of Cardboard: Big Ideas for Creativity, Collaboration, Storytelling, and Reuse (2015) and The Art of Spray Paint: Inspirations and Techniques from Masters of Aerosol (2017). She founded the popular art history blog Art Nerd New York in 2012, which focused on art history and contemporary art in New York City.
"Liberated" (aka fired) from her Chelsea gallery job in 2009, Zimmer has spent the last ten years crafting her own career in the art world which has included curating, art writing and criticism (both print and online), event planning, PR, artist management, and an array of related gigs that being her own boss has given her the freedom to do. Since 2016, she has worked as an artist liaison on copyright infringement cases for law firm Kushnirsky Gerber PLLC in New York. Zimmer has curated over forty exhibitions and projects in New York, Miami, Nantucket, Philadelphia, Chicago, Hamburg, Germany, Paris, France and the White House under the Obama administration. In 2018 she donated her left kidney to a friend and with new perspective decided to hang up her curatorial hat to focus on writing projects full-time.
Zimmer lives in New York City with her boyfriend Logan Hicks and his son Sailor, but can often be found eating cheese and baguette in Paris with Maria.