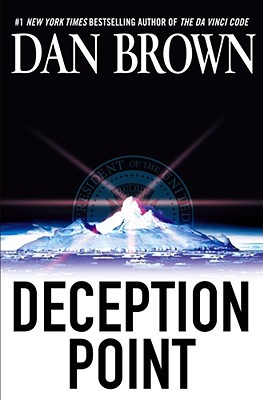 From the New York Times bestselling author of The Da Vinci Code comes an explosive, high-tech thriller that takes readers from the chilling depths of the Arctic Ocean to the treacherous heights of Washington power.
When a new NASA satellite spots evidence of an astonishingly rare object buried deep in the Arctic ice, the floundering space agency proclaims a much-needed victory...a victory that has profound implications for U.S. space policy and the impending presidential election. With the Oval Office in the balance, the President dispatches White House Intelligence analyst Rachel Sexton to the Milne Ice Shelf to verify the authenticity of the find. Accompanied by a team of experts, including the charismatic academic Michael Tolland, Rachel uncovers the unthinkable: evidence of scientific trickery -- a bold deception that threatens to plunge the world into controversy.
But before Rachel can contact the President, she and Michael are attacked by a deadly team of assassins controlled by a mysterious power broker who will stop at nothing to hide the truth. Fleeing for their lives in an environment as desolate as it is lethal, their only hope for survival is to find out who is behind this masterful ploy. The truth, they will learn, is the most shocking deception of all.
In Deception Point, bestselling author Dan Brown transports readers from the ultrasecret National Reconnaissance Office to the towering ice shelves of the Arctic Circle, and back again to the hallways of power inside the West Wing. Heralded for masterfully intermingling science, history, and politics in his critically acclaimed, blockbuster thrillers Angels & Demons and The Da Vinci Code, Brown has crafted a novel in which nothing is as it seems -- and behind every corner is a stunning surprise. Deception Point is pulse-pounding fiction at its best.

The Washington Post A case study in how to manufacture suspense. Unputdownable.

The New York Daily News Thriller scribe Dan Brown handles the intrigue and action well, weaving together malevolent forces from the aerospace industry, the military and Washington's legislative demimonde. His research is impeccable, and all the amazing gadgetry the characters use is certified real-life hardware.

Publishers Weekly An excellent thriller. A big yet believable story unfolding at breakneck pace, with convincing settings and just the right blend of likable and hateful characters. A finely polished amalgam of action and intrigue. Brown has done his research, folding in sophisticated scientific and military details that make his plot far more fulfilling than the norm.