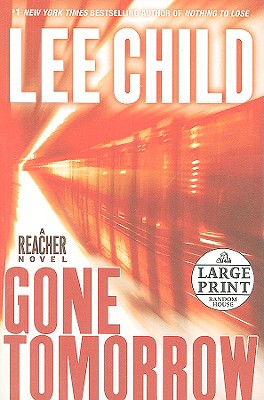 “Jack Reacher is back. It's 2:00 a.m. on a New York City subway, and something is not quite right, as Jack spots a passenger who might not be what she seems. In his most intensely gripping novel yet, Lee Child takes us on the ride of a lifetime through the dark warrens of NYC.”
— Jennie Turner-Collins, Joseph-Beth Booksellers, Cincinnati, OH

In the next few tense seconds Reacher will make a choice–and trigger an electrifying chain of events in this gritty, gripping masterwork of suspense by #1 New York Times bestseller Lee Child.

Susan Mark was the fifth passenger. She had a lonely heart, an estranged son, and a big secret. Reacher, working with a woman cop and a host of shadowy feds, wants to know just how big a hole Susan Mark was in, how many lives had already been twisted before hers, and what danger is looming around him now.

Because a race has begun through the streets of Manhattan in a maze crowded with violent, skilled soldiers on all sides of a shadow war. Susan Mark’s plain little life was critical to dozens of others in Washington, California, Afghanistan . . . from a former Delta Force operator now running for the U.S. Senate, to a beautiful young woman with a fantastic story to tell–and to a host of others who have just one thing in common: They’re all lying to Reacher. A little. A lot. Or maybe just enough to get him killed.

In a novel that slams through one hairpin surprise after another, Lee Child unleashes a thriller that spans three decades and gnaws at the heart of America . . . and for Jack Reacher, a man who trusts no one and likes it that way, it’s a mystery with only one answer–the kind that comes when you finally get face-to-face and look your worst enemy in the eye.

Lee Child is the author of thirteen Jack Reacher thrillers, including the" New York Times" bestsellers""Persuader," "The Enemy, One Shot, The Hard Way," " and #1 bestsellers Bad Luck and Trouble and Nothing to Lose. His debut, " Killing Floor, " won both the Anthony and the Barry awards for Best First Mystery, and "The Enemy" won both the Barry and Nero awards for Best Novel. Foreign rights in the Reacher series have sold in forty territories. All titles have been optioned for major motion pictures. Child, a native of England and a former television director, lives in New York City, where he is at work on his fourteenth Jack Reacher thriller.""

“The ever-resourceful and vengeful Reacher takes on nearly a score of the bad guys in an exciting climax to an enthralling book…complete with cover-ups and numerous intriguing twists.”—Library Journal, starred review

“A superb New York novel…. Child grounds his hero’s hard body and hard-drive brain in believable detail, and he sets the action against a precisely described landscape.” —Booklist, starred review

“All good thriller writers know how to build suspense and keep the pages turning, but only better ones deliver tight plots as well, and only the best allow the reader to match wits with both the hero and the author. Bestseller Child does all of that in spades.... [He] sets things up subtly and ingeniously, then lets Reacher use both strength and guile to find his way to the exciting climax.”—Publishers Weekly, starred review