Akhi's Bytes and NASA's Flights: Off to Mars (Paperback) 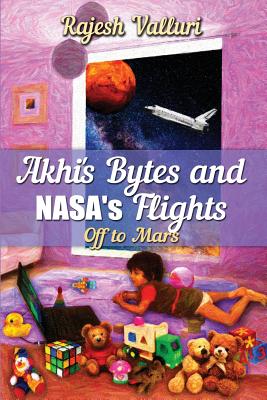 By Rajesh Valluri
$9.99
Email or call for price.

Let's see if any of the names mean anything to you.

No? How about these below?

In a world where Kim Kardashian, Rihanna, and Katy Perry are what we have for role models, how do we go about inspiring little girls to aim for greatness? The first list of names contains some of the esteemed scientists who won the Nobel Prize in their chosen fields. The second list was that of a new generation of Astronauts. They are the women who climb into a rocket and fly all the way into space for the purpose of science, and we don't even recognize their names. How do we teach them there is this whole wide world for their taking and they don't just have to be glam dolls and look pretty? That their greatest asset is not just their beauty and good looks, but their amazing brain and their character.

America, which was once the citadel of greatness in Science and Engineering, has sadly fallen behind in the past few decades. With Hollywood relentlessly making fun of anything and anyone "smart" with shows like "The Big Bang Theory" and a host of nerd comedies, it is impossible for kids, both boys and girls, to be excited by science. When the young minds show even hints of scientific curiosity, the society and media is quick to label them "geeks" and pretty much ostracize them socially. It became ok for these kids to be bullied in school. It's much cooler to be someone who can throw a football than to be someone who can use a telescope to detect distant stars.

Parents, too, are more proud of their children's athletic performances than academic ones. Girls would rather be cheerleaders for their high school basketball team than be seen with a test tube or a microscope. They would rather aim to be on a low rent reality TV show rather than excel in college. Why ?

I wrote this book in the hope to change at least a few young minds. I wanted children, girls in particular, to see the world in a different light. I want them inspired, excited and determined to achieve great things in their lives. I want science to be their guiding light, their true calling and I hope they grow up to turn the tide of declining scientific progress in the US. I want them to be the next Nobel winners, the next generation astronauts, and a million other things they could be. I want them to be proud of their mental faculties, not just their physical attributes. I want them to be the future of our world in the true sense of that word.