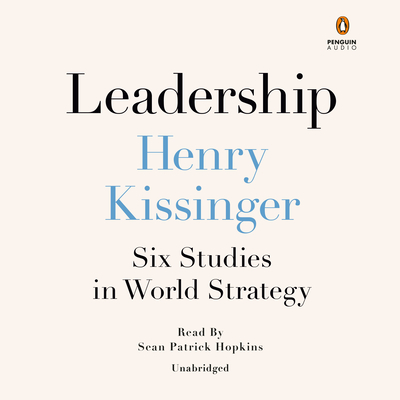 Henry Kissinger, consummate diplomat and statesman, examines the strategies of six great twentieth-century figures and brings to life a unifying theory of leadership and diplomacy

“An extraordinary book, one that braids together two through lines in the long and distinguished career of former Secretary of State Henry Kissinger...In Leadership he presents a fascinating set of historical case studies and political biographies that blend the dance and the dancer, seamlessly.” - James Stavridis, The Wall Street Journal

“Leaders,” writes Henry Kissinger in this compelling book, “think and act at the intersection of two axes: the first, between the past and the future; the second, between the abiding values and aspirations of those they lead. They must balance what they know, which is necessarily drawn from the past, with what they intuit about the future, which is inherently conjectural and uncertain. It is this intuitive grasp of direction that enables leaders to set objectives and lay down a strategy.”

In Leadership, Kissinger analyses the lives of six extraordinary leaders through the distinctive strategies of statecraft, which he believes they embodied. After the Second World War, Konrad Adenauer brought defeated and morally bankrupt Germany back into the community of nations by what Kissinger calls “the strategy of humility.” Charles de Gaulle set France beside the victorious Allies and renewed its historic grandeur by “the strategy of will.” During the Cold War, Richard Nixon gave geostrategic advantage to the United States by “the strategy of equilibrium.” After twenty-five years of conflict, Anwar Sadat brought a vision of peace to the Middle East by a “strategy of transcendence.” Against the odds, Lee Kuan Yew created a powerhouse city-state, Singapore, by “the strategy of excellence.” And, though Britain was known as “the sick man of Europe” when Margaret Thatcher came to power, she renewed her country’s morale and international position by “the strategy of conviction.”

To each of these studies, Kissinger brings historical perception, public experience and—because he knew each of the subjects and participated in many of the events he describes—personal knowledge. Leadership is enriched by insights and judgements that only Kissinger could make and concludes with his reflections on world order and the indispensability of leadership today.

Henry Kissinger served in the US Army during the Second World War and subsequently held teaching posts in history and government at Harvard University for twenty years. He served as national security advisor and secretary of state under Richard Nixon and Gerald Ford, and has advised many other American presidents on foreign policy. He received the 1973 Nobel Peace Prize, the Presidential Medal of Freedom, and the Medal of Liberty, among other awards. He is the author of numerous books and articles on foreign policy and diplomacy, including most recently On China and World Order. He is currently chairman of Kissinger Associates, Inc., an international consulting firm.

“An extraordinary book, one that braids together two through lines in the long and distinguished career of former Secretary of State Henry Kissinger. The first is grand strategy: No practical geopolitical thinker has more assuredly mastered the way the modern global system works or how nations use the tools of statecraft to bend an often-resistant world to their will. But Mr. Kissinger is also an astute observer of the personal element in strategy—the art and science of leadership, or how, on the executive level, ‘decisions [are] made, trust earned, promises kept, a way forward proposed.’ In Leadership he presents a fascinating set of historical case studies and political biographies that blend the dance and the dancer, seamlessly.” —James Stavridis, The Wall Street Journal

“Although Kissinger, now aged 99, has not held office since 1977, he has advised virtually every US president since Nixon. . . . Elder statesman is an overused term but Kissinger is the genuine article, and worth listening to.” —Financial Times

“A must read. . . . [Kissinger] continues to contribute to our understanding of the world. His books—including this one—will hopefully be read well into the future. Indeed, our present and future leaders would benefit from reading all of Kissinger’s books. They are timeless.” —New York Journal of Books

Kissinger’s combination of historical awareness, personal familiarity with the leaders, and diplomatic experience provides for a cogent read on the iconic statesmen of the Cold War era.” —The New Criterion

“One of America’s most legendary diplomats finds the soul in statecraft in these enlightening sketches of world leaders. . . . Kissinger infuses his lucid policy analyses with colorful firsthand observations. . . . Kissinger’s portraits of politicians spinning weakness and defeat into renewed strength are captivating. This is a vital study of power in action.” —Publishers Weekly