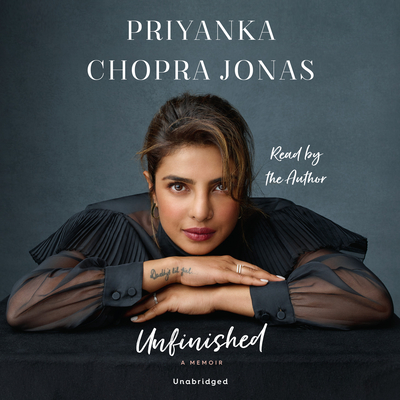 NEW YORK TIMES BESTSELLER • In this thoughtful and revealing memoir, readers will accompany one of the world’s most recognizable women on her journey of self-discovery.

“I have always felt that life is a solitary journey, that we are each on a train, riding through our hours, our days, our years. We get on alone, we leave alone, and the decisions we make as we travel on the train are our responsibility alone.”

A remarkable life story rooted in two different worlds, Unfinished offers insights into Priyanka Chopra Jonas’s childhood in India; her formative teenage years in the United States; and her return to India, where against all odds as a newcomer to the pageant world, she won the national and international beauty competitions that launched her global acting career. Whether reflecting on her nomadic early years or the challenges she has faced as she has doggedly pursued her calling, Priyanka shares her challenges and triumphs with warmth and honesty. The result is a book that is philosophical, sassy, inspiring, bold, and rebellious. Just like the author herself.

From her dual-continent twenty-year-long career as an actor and producer to her work as a UNICEF Goodwill Ambassador, from losing her beloved father to cancer to marrying Nick Jonas, Priyanka Chopra Jonas’s story will inspire a generation around the world to gather their courage, embrace their ambition, and commit to the hard work of following their dreams.

Priyanka Chopra Jonas is a multi-award-winning actor and producer and one of the most recognized personalities in the world. A former Miss World, she made her movie debut in 2002 and has appeared in more than sixty films produced in India and the United States. In 2015 she made history as the first Indian-born actor to lead an American network TV series when she starred in the ABC drama Quantico. For her work during her longtime association with UNICEF, Chopra Jonas was awarded the prestigious Danny Kaye Humanitarian Award in 2019. She lives in Los Angeles with her husband, Nick, and Diana, Gino, and Panda, their three dogs.

“Priyanka Chopra Jonas’s memoir, Unfinished, is a moving story of her rise to fame. . . . [A] deeply open and honest account of her experience navigating life in the public eye, as well as the extreme hard work and dedication she put into her career . . . Her writing is open, engaging, and full of energy. She writes, it seems, to connect. . . . Even those who are not already fans of Chopra Jonas will find reason to enjoy her story, one that chronicles a deep love of family and culture and a passion for standing up for what you believe in.”—Associated Press

“[Chopra Jonas] reflects on how she catapulted herself into America’s entertainment industry with her charisma and resilience . . . [Unfinished] exemplifies how she persisted in the face of her detractors.”—USA Today

“Actor and producer Chopra Jonas’s memoir captures the excitement of an Indian teenager launched into fame and moving rapidly from a national to an international stage. . . . Chopra Jonas weaves in her personal struggles and family tragedies, thus revealing the depth behind her self-assurance and resilience.”—Booklist

“A lively memoir from a hardworking entertainer.”—Kirkus Reviews