After the Sun (Hardcover) 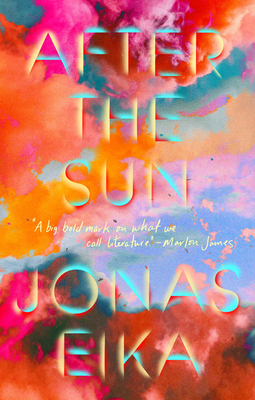 “Like Thomas Pynchon taking on late capitalism. . . . surrealistic, granular in its details, and concerned with social entropy and desperate attempts at communion.” —Wall Street Journal

From a major new international voice, mesmerizing, inventive fiction that probes the tender places where human longings push through the cracks of a breaking world.

Under Cancún’s hard blue sky, a beach boy provides a canvas for tourists’ desires, seeing deep into the world’s underbelly. An enigmatic encounter in Copenhagen takes an IT consultant down a rabbit hole of speculation that proves more seductive than sex. The collapse of a love triangle in London leads to a dangerous, hypnotic addiction. In the Nevada desert, a grieving man tries to merge with an unearthly machine.

After the Sun opens portals to our newest realities, haunting the margins of a globalized world that’s both saturated with yearning and brutally transactional. Infused with an irrepressible urgency, Eika’s fiction seems to have conjured these far-flung characters and their encounters in a single breath. Juxtaposing startling beauty with grotesquery, balancing the hyperrealistic with the fantastical—“as though the worlds he describes are being viewed through an ultraviolet filter,” in one Danish reviewer's words—he has invented new modes of storytelling for an era when the old ones no longer suffice.

Jonas Eika has received numerous awards for his writing, including the Nordic Council Literature Prize. His short fiction has appeared in The New Yorker. He lives in Copenhagen.

Sherilyn Nicolette Hellberg is a writer and a translator of Danish literature, most recently of Johanne Bille’s Elastic and Ida Marie Hede’s Adorable.

Praise for After the Sun:

“Like Thomas Pynchon taking on late capitalism. . . . surrealistic, granular in its details, and concerned with social entropy and desperate attempts at communion.” —Wall Street Journal

“[A] rare. . . talent that corrals flawed characters and explosive politics into a sweeping, searing collection. . . . a collage that gives voice to the dread of our time.” —Oprah Daily

“Bewitching . . .[and] scarily intimate. . . .What radiates from Eika’s gritty magical realism is ambient but potent: a grief so profound that it transfigures, a loneliness so abject that it fractures perception. . . . Dreamy, febrile and thoroughly twisted, After the Sun is . . . a bold debut from an author who understands the generative capacity of fiction.” —Seattle Times

“Urgent, deliriously discomforting . . . . Eika holds nothing back in his fiction, he goes into the tightest of spaces and most intimate and terrifying of moments in order to break through to places few have been before — or even imagined existing.” —Refinery29

“Searingly beautiful. . . breathtaking in the truest sense. . . . [Eika’s] understanding of the alienation felt deep at the heart of so many, and the abstracted and byzantine nature of the systems undergirding our detached lives is unparalleled. But most of all. . . he’s able to realize the joy to be found, however fleetingly, in our shattered world.” –Chicago Review of Books

“The characters in these atmospheric, immersive stories are as arresting as the lives they lead. . . . [it] will leave you unsettled and mulling over our world's isolation and interconnectivity.” –Good Housekeeping

“From a Danish wunderkind . . .mesmerizing . . .utterly brilliant . . .these strange stories catch like fishhooks into the reader's nervous system.” —Kirkus Reviews

“Surreal [and] globe-spanning . . . Eika’s fusing of the magic realist mode with the alienation of modernity makes for a winning formula.” —Publishers Weekly

“Gripping. . . . The global reach of these stories underscores the universality of the alienation that these characters endure. And the surreal debris Eika evokes from the fallout of capitalism has its own resonance.” –Booklist

“How  does it feel to be a native of the digital era? What effect does late capitalism have upon our intimate lives? A lot of people instinctively sense that time and space feel different these days, but few people seem able to capture that feeling in prose. Jonas Eika manages it. After the Sun is an inventive and exciting book – a true original.” —Zadie Smith

“Striking literary craftsmanship in an experimental mix of shock-lit, sci-fi, dada and Joycean glints presented as loose time scenes that slide in and out like cards in the hands of the shuffler. By the end, this reader had the impression of having been drawn through a keyhole.” —Annie Proulx, author of Barkskins and The Shipping News

“Eika's prose flexes a light-footed, vigilant, and unpredictable animalism: it's practically pantheresque. After the Sun is an electrifying, utterly original read.” —Claire-Louise Bennett, author of Pond and Checkout 19

“Jonas Eika blew the doors and windows of my imagination open, and now there is a galaxy in my head and a supernova in my heart. After the Sun vibrates with the aftershock of capitalism and reality flux. Its characters confront the world we've made as if they are facing off with ex-lovers who won't leave, caught at the instant before they will either flame on or flame out. Thrilling.”  —Lidia Yuknavitch, author of The Chronology of Water and Thrust

“The young Danish author Jonas Eika completely destroys every safety net: his book After the Sun has a combustible power in its longing for another world—and it expands the term ‘fiction.’ No other poet has exploded onto the scene like Eika in a long while.” —Der Spiegel

“After the Sun has surprised and enthralled the jury with its global perspective, its sensual and imaginative language, and its ability to speak about contemporary political challenges without the reader feeling in any way directed to a certain place. . . . There is a real sense of poetic magic. Reality opens into other possibilities; other dimensions. There is something wonderful and hopeful in it that reminds us how literature can do more than just mirror what we already know.” —The Jury of the Nordic Council Literature Prize