The Smash-Up: A Novel (Paperback) 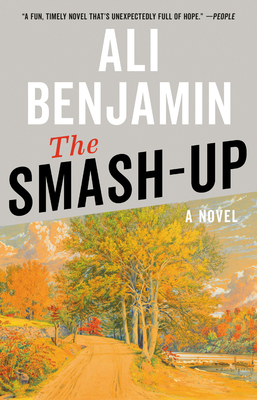 “Ali Benjamin’s debut adult novel is an interesting portrayal of a contemporary marriage and the many pressures it faces. Through the lives of her main characters, Benjamin explores many present-day issues — the #MeToo movement, the place of social protests, the difficulties of childrearing, and the temptation of infidelity. As Zo and Ethan each face a moral dilemma, Benjamin shows us their individual struggles. While there is sadness and conflict in this book, there is also hope.”
— Jane Stiles, Wellesley Books, Wellesley, MA

“An exhilarating ride . . . hilarious . . . a modern and energetic story about a marriage on the skids.”—The New York Times

Ethan has always been one of the good guys, and for years, nobody has appreciated this fact more than his wife, Zo. Until now. Jolted into activism by the 2016 election, Zo’s transformed their home into the headquarters for the local resistance, turning their comfortable decades-long marriage inside-out.

Unfolding over fivet urbulent days in 2018, The Smash-Up wrestles shrewdly with some of the biggest questions of our time: What, exactly, does it mean to be a good guy? What will it take for men to break the “bro code”? How does the world respond when a woman demands more?  Can we ever understand another's experiences… and what are the consequences of failing to try? Moving, funny, and cathartic, this portrait of a marriage—and a nation—under strain is, ultimately, a magic trick of empathy, one that will make you laugh and squirm until its final, breathless pages.

Ali Benjamin is the author of the young adult novel The Thing About Jellyfish, an international bestseller and a National Book Award finalist. Her The Next Great Paulie Fink was named a top children’s book of the year by Kirkus Reviews, Publishers Weekly, the New York Public Library, and the Los Angeles Public Library. Her work has been published in more than twenty-five languages in more than thirty countries. Originally from the New York City area, she now lives in Massachusetts. This is her first adult novel.

“An exhilarating ride . . . hilarious . . . there are no heroes here; I got whiplash trying to figure out who I trusted and what I was rooting for, and the sensation was mesmerizing. Benjamin is like an overly chatty but skilled magician . . . a modern and energetic story about a marriage on the skids.”—The New York Times

“Borrow names and plot elements from Edith Wharton’s Ethan Frome. Satirize progressive parenting and education à la Where’d You Go, Bernadette. Then light it all up with the feminist fire ignited by the Brett Kavanaugh hearings—and what do you get? A fun, timely novel that’s unexpectedly full of hope.”—People

“It is not the transposition of that well-trod narrative and its character types that compels; it is the contrast sharpened in the act. . . . Benjamin doesn’t remake Ethan Frome so much as she contends with it. The Smash-Up is an homage and a critique. . . .  An astute commentary on the differences between Wharton’s time and ours.”—Los Angeles Times

“The story’s day-by-day format builds a brisk page-turning momentum. . . . Benjamin has a keen eye and ear for the revealing cultural detail, whether it’s billionaire couples critiquing their children’s school reading lists at parents’ night or someone in their 20s working some questionable side hustles in the gig economy. It’s as if she Marie Kondo’d her scenes to keep only the elements that would bring readers some joy.”—WBUR, The ARTery

“Just when you think you know where this narrative is going, Benjamin flips the script expertly. . . . In her fantastic adult debut, YA and middle grade author Benjamin (The Next Great Paulie Fink) skewers her subjects but still preserves their humanity. New York expats, middle-aged Gen-Xers, disaffected millennials, conniving school moms, exasperating children with improbable names—all get the gimlet eye in this timely, witty novel.”—Library Journal (starred review)

“Ambitious . . . With satire and suspense, Benjamin handily encapsulates the incomprehension, sadness, and rage of the Trump era.”—Publishers Weekly

“Funny, withering, and devastating . . . Punching neither up nor down but to the side, Benjamin (The Thing About Jellyfish) takes aim at a contemporary attitude that would have flummoxed Edith Wharton. As one of Benjamin’s characters puts it, ‛When did we all fall so in love with our own opinions?’ ”—Shelf Awareness

“A contemporary reflection on power and sex . . . Benjamin’s immediately engaging writing captures the complicated emotions and biting humor of these bruising times and their impact on relationships.”—Booklist