It Started with a Dog (Lucky Dog) (Paperback) 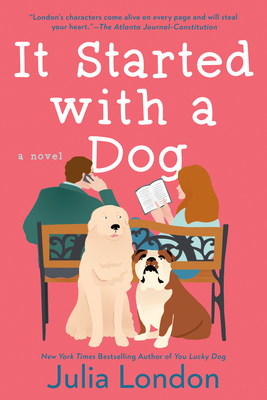 Thanks to an accidental phone swap, two adorable rescue pups, and a coffeehouse clash, a holiday flirtation goes to the dogs and hilarity ensues, from New York Times bestselling author Julia London.

All Harper Thompson wants for Christmas is the huge promotion she's worked so hard for—which she should get, as long as her launch of the hip new coffeehouse, Deja Brew, goes according to plan. Jonah Rogers is trying to save his family's coffee shop, Lucky Star, from going out of business, which will be tough with the brand-new Deja Brew opening across the street.

When Jonah and Harper meet for the first time after accidentally swapping phones, their chemistry is as electric as a strand of Christmas lights. He's a tall, handsome, compassionate hunk of engineer, and she's an entrepreneur whose zest for life is very sexy. They love all the same things, like scary movies, greasy food—and most of all, dogs. It's a match made in heaven...until Jonah finds out that Harper's the one about to put him out of business.

Only one coffee shop likely can survive, and a competition of one-upmanship ensues in a battle of the brews. The paws really come out when the local rescue shelter has a fundraiser where local businesses foster dogs, and patrons vote with their dollars for their favorite pup. Harper takes in an adorable old bulldog on behalf of Deja Brew, while Jonah fosters a perky three-legged dachshund for Lucky Star. As the excitement builds for who will be crowned King Mutt and king of the coffee hill, Harper and Jonah must decide if their connection was all steam or if they are the perfect blend.

Julia London is the New York Times, USA Today, and Publishers Weekly bestselling author of numerous romance and women's fiction novels. She is also the recipient of the RT Bookclub Award for Best Historical Romance and a four-time finalist for the prestigious RITA Award for excellence in romantic fiction.

“Adorable....Sparkling chemistry, fancy frappés, and a host of quirky characters keep the rivalry light and lively....The couple’s palpable attraction and adorable pets accentuate the charm of this lovable riff on You’ve Got Mail.”
—Publishers Weekly

“Full of laugh out loud charm.”
—Woman’s World, on You Lucky Dog

“Julia London's hilarious and sweet romance You Lucky Dog begins with an accidental dog-swapping which quickly leads to puppy love between two very different dog owners. Trust us, even if you're a cat person, you won't be able to resist this story's charms.”
—PopSugar

“I laughed, I teared up, and I rooted for these characters every misstep of the way… a perfect choice this summer.”
—Fresh Fiction, on You Lucky Dog

“Comedic and fast paced. It is filled with an offbeat cast, zany coincidences and romantic moments and mishaps that will leave readers giggling in amusement.”
—Shelf Awareness, on You Lucky Dog

"A canine mix-up leads to unexpected love in this bright, bubbly rom-com….There’s heady chemistry between the optimistic Carly and the slightly nerdy Max as they stumble into co-parenting the pooches, with the fabulous, four-legged supporting characters providing both laugh-out-loud hilarity and some touching moments. Readers will be in doggie heaven."
—Publishers Weekly, on You Lucky Dog

“Once again, London proves she is a master of deliciously snarky dialogue and delectable sexual chemistry, both of which are expertly infused in a delightful love story that not only joyfully celebrates the special bond between humans and dogs but also doesn’t shy away from exploring some of life’s more serious challenges...”
—Booklist (starred review), on You Lucky Dog

“[An] affecting and ebullient romantic comedy… London’s loose and limber comedic writing amplifies Max and Carly’s appeal, filling each voice with a unique perspective and personality.”
—BookPage, on You Lucky Dog

Praise for the novels of Julia London

"London's characters come alive on every page and will steal your heart."--Atlanta Journal-Constitution

“A novelist at the top of her game.”--Booklist

“London's writing bubbles with high emotion as she describes sexual enthusiasm, personal grief and familial warmth. Her blend of playful humor and sincerity imbues her heroines with incredible appeal."--Publishers Weekly

“Kudos to London—she tackles family issues and weaves them into a special romance that travels a bumpy road to happily ever after.”--RT Book Reviews