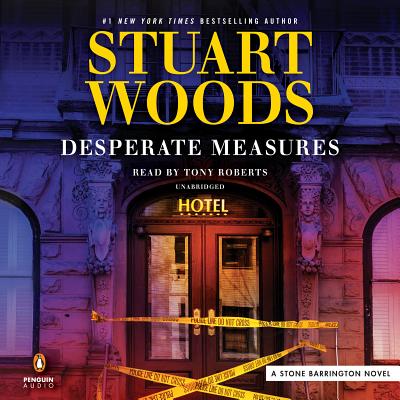 By Stuart Woods, Tony Roberts (Read by)
Please email or call us for pricing on this book.

This is book number 47 in the A Stone Barrington Novel series.

Upon returning to the states from a European jaunt, Stone Barrington makes the acquaintance of a stunning woman who seems like she could be an ideal candidate to meet some of his professional--and personal--needs. Before long, though, Stone is put to the task of protecting his new hire when New York City is rocked by a series of disturbing crimes, and it looks as if she might be the next target.

In the city that never sleeps there's always a plot being hatched, and the only recourse is constant vigilance and a bit of luck. But if those defensive systems fail, Stone will have to go head-to-head against some of the most dastardly scum he's ever faced . . .

"Woods creates another action-packed thriller for his readers to devour, with plenty of interesting twists and turns that make for a nonstop, can't catch-your-breath read."--Booklist

"Mr. Woods knows how to portray the beautiful people, their manners and mores, their fluid and sparkling conversation, their easy expectations and all the glitter that surrounds and defines them. A master of dialogue, action and atmosphere, the Key West resident has added one more jewel of a thriller-mystery to his ever-growing collection."--Fort Myers Florida Weekly