On Every Tide: The Making and Remaking of the Irish World (Hardcover) 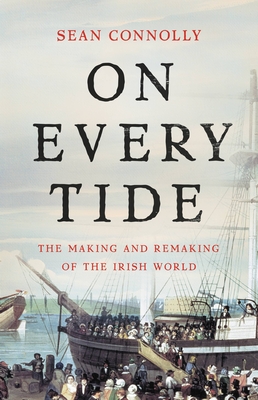 A sweeping history of Irish emigration, arguing that the Irish exodus helped make the modern world

When people think of Irish emigration, they often think of the Great Famine of the 1840s, which caused many to flee Ireland for the United States. But the real history of the Irish diaspora is much longer, more complicated, and more global.

In On Every Tide, Sean Connolly tells the epic story of Irish migration, showing how emigrants became a force in world politics and religion. Starting in the eighteenth century, the Irish fled limited opportunity at home and fanned out across America, Canada, Australia, and New Zealand. These emigrants helped settle new frontiers, industrialize the West, and spread Catholicism globally. As the Irish built vibrant communities abroad, they leveraged their newfound power—sometimes becoming oppressors themselves.

Deeply researched and vividly told, On Every Tide is essential reading for understanding how the people of Ireland shaped the world.

Sean Connolly is professor of Irish history (emeritus) and visiting research fellow at the Institute of Irish Studies at Queen’s University Belfast. He is the author of five books, including Contested Island and Divided Kingdom, and was general editor of The Oxford Companion to Irish History. Born in Dublin, he lives in Belfast.

“Engaging and erudite… Connolly covers a huge amount of ground and pulls together a great array of historical scholarship.”—New York Times

“A rich history of the diaspora challenges conventional wisdom — and captures the emigrant struggle for power and prosperity.”—Sunday Times (UK)

“An impressive… feat of scholarship and research.” —Business Post (Ireland)

“Rich in detail and well researched, this is essential reading for understanding how the people of Ireland shaped the world.”—Belfast Telegraph (Ireland)

“Impressive, provocative and perception-tilting work… This is an exhaustive, yet never exhausting, historical account of the multi-faceted story of the Irish diaspora.”—Irish Independent (Ireland)

“Connolly draws on an impressive array of primary evidence, including census records, personal testimonies, and popular fiction, without getting bogged down in statistics and minutiae. This is a seamless and well-rounded study.”—Publishers Weekly

“In a sweeping historical narrative studded with original insights, Sean Connolly shows how the great migration of eight million Irish people prefigured the main patterns of international migration today. Irish migrants all over the world—roughly half of whom were women—took on the work that other people wouldn’t do, served the rich, built roads, canals, railroads, and cities, and endured sustained bigotry for their poverty, their manners, and their religion. They also plundered indigenous land and reaped the benefits of being white, Christian, and English-speaking in the colonized lands where they settled. Elegantly written, compellingly argued, and genuinely global in scope, On Every Tide is a great book by one of Ireland’s foremost historians.”—Kevin Kenny, New York University

“Stylish and lucid, this intrepid and provocative book traces in a manner at once bold and nuanced the movements of Irish migrants across space and time over the past two centuries. Sean Connolly is alert to the complex fate of victims, exploiters, soldiers of fortune, or the merely footloose who used the wide world to explore themselves. In his analysis, imaginative audacity is tempered only by sound scholarly scruple. A work of unprecedented synthesis which is magisterial and informed, yet whose challenge to conventional wisdom will generate animated debate for years to come.”—Declan Kiberd, University of Notre Dame

“Three decades ago, President Mary Robinson lit a symbolic candle in the Irish ‘White House’ to acknowledge the nation beyond, the Irish diaspora. But it is only now that we have the all-encompassing history of that diaspora—across more than three centuries and over four continents. Connolly’s quite remarkable achievement has been to document that history in a single volume, to interrogate all its complexities and contradictions, and to construct a taut narrative that is both intellectually compelling and superbly crafted.”—David Dickson, Trinity College Dublin

“What a fine book! It has all the virtues one wants in a work of synthesis. Sean Connolly has read almost everything in print on the Irish diaspora, and he distills the material in a gentle, generous, and highly readable fashion—and yet with an engaged and edgy quality. Thus, several of the myths about the Irish worldwide—such as that they had an instinctive sympathy with indigenous and racialized groups—are called into question. On Every Tide is the ideal place for anyone interested in the Irish diaspora to begin, and, for those with some previous knowledge, to recalibrate their compass.”—Donald H. Akenson, Queen’s University

“A nuanced overview of Irish migrations, focusing on the experiences of both Catholic and Protestant Irish in United States, Great Britain, Canada, Australia, New Zealand, and, to a lesser extent, Argentina. Connolly offers a subtle analysis of the meaning of ‘diaspora’ in the context of the varied patterns of Irish demographics and integration across several societies. On Every Tide likewise presents shrewd observations on Ireland’s interactions with its far-flung progeny as well as on the changing nature of what it means to be Irish, whether one lives on the island or elsewhere. All readers interested in the topics of international migration, ethnicity, assimilations, and globalization should put this book on their reading list.”—Thomas J. Archdeacon, University of Wisconsin-Madison

“On Every Tide is a richly detailed, deeply insightful, and beautifully written panorama of Ireland’s history of migration. Connolly excels in explaining the causes of Irish emigration and the impact of that mobility on Ireland, the people who left home, and the societies they helped create. This impressive book constitutes a major contribution to the new, globally oriented scholarship on the Irish diaspora.”—Malcolm Campbell, University of Auckland

“On Every Tide is an expert survey of the Irish diaspora from the seventeenth century to the present day. Elegantly written, highly accessible, yet carefully researched and wonderfully comprehensive, the book displays the impressive skills of one of Ireland’s foremost historians. Connolly’s masterful contribution to our understanding of Irish emigration will not only be essential reading for students of Irish and American history, it will appeal to anyone interested in how Irish migration impacted the history of the modern world.”
—Robert Savage, Boston College

“On Every Tide is the first comprehensive history of the Irish diaspora from pre-famine times to the present. This remarkable book, which is both readable and scholarly, ranging from North America and Britain to South America, Australia, New Zealand and South Africa, highlights the diversity of the Irish diaspora: Protestant and Catholic, unionist and nationalist, and their different experiences in the places where they settled.”—Mary E. Daly, University College Dublin