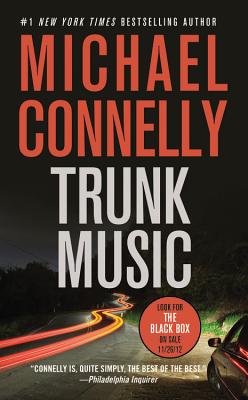 By Michael Connelly
Email or call for price.
Hard to Find

This is book number 5 in the A Harry Bosch Novel series.

Back on the job after an involuntary leave of absence, LAPD homicide detective Harry Bosch is ready for a challenge. But his first case is a little more than he bargained for.

It starts with the body of a Hollywood producer in the trunk of a Rolls-Royce, shot twice in the head at close range - what looks like "trunk music," a Mafia hit. But the LAPD's organized crime unit is curiously uninterested, and when Harry follows a trail of gambling debts to Las Vegas, the case suddenly becomes more complex - and much more personal.

A rekindled romance with an old girlfriend opens new perspectives on the murder, and he begins to glimpse a shocking triangle of corruption and collusion. Yanked off the case, Harry himself is soon the one being investigated. But only a bullet can stop Harry when he's searching for the truth . . .

Michael Connelly is a former journalist and has won every major prize for crime fiction. He lives in Florida.

"Compelling...Connelly displays a wonderful atmospheric feel for the posh and the poor...The last pages bring things to a shocking end that should satisfy Connelly's growing audience."—Washington Post

"For those seeking the kind of action that takes more turns than a roulette wheel, Trunk Music is a sure bet."—People

"A jazzy, funky, roller coaster of a book. . . Connelly has it all working together here: skillful dialogue, solid plotting, nuances of race and status and a pace that will leave readers gasping to keep up. "—Publishers Weekly

"If you'd like to see a buried love affair take off like a rocket and a bunch of crooks and crooked cops as canny and treacherous as le Carré's spies, you've come to the right place."—Kirkus Reviews