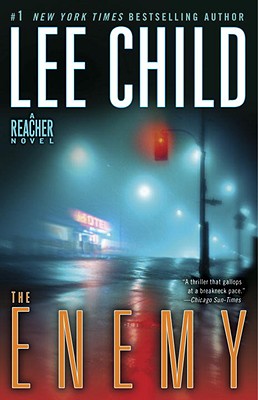 Jack Reacher. Hero. Loner. Soldier. Soldier’s son. An elite military cop, he was one of the army’s brightest stars. But in every cop’s life there is one case that changes everything. For Jack Reacher, this is that case.

New Year’s Day, 1990. In a North Carolina motel, a two-star general is found dead. His briefcase is missing. Nobody knows what was in it. Within minutes Reacher has his orders: Control the situation. Within hours the general’s wife is murdered. Then the dominoes really start to fall.

Somewhere inside the vast worldwide fortress that is the U.S. Army, Reacher is being set up as a fall guy with the worst enemies a man can have. But Reacher won’t quit. He’s fighting a new kind of war—against an enemy he didn’t know he had. And against a conspiracy more chilling, ingenious, and treacherous than anyone could have guessed.

Lee Child is the #1 internationally bestselling author of thirteen Reacher thrillers, including the New York Times""bestsellers""The Enemy, One Shot, The Hard Way, and the #1 bestselling Bad Luck and Trouble""and Nothing to Lose. His debut, "Killing Floor," won both the Anthony and the Barry awards for Best First Mystery, and The Enemy won both the Barry and the Nero awards for Best Novel. Foreign rights in the Reacher series have sold in forty territories, and all titles have been optioned for major motion pictures. Child, a native of England and a former television director, lives in New York City, where he is at work on his fourteenth Reacher thriller, 61 Hours. Check your favorite bookstores for the newest Reacher thriller, Gone Tomorrow, now on sale. "From the Paperback edition."

"The best showcase of Child's talent to date. .... one of the best thriller writers at work."—Rocky Mountain News

"The Enemy sizzles with suspense and action. Child sets a breathless pace."—Orlando Sentinel

"A rip-roaring read from the first page to the last ."—St. Petersburg Times

"Will keep you guessing until the final page."—Playboy