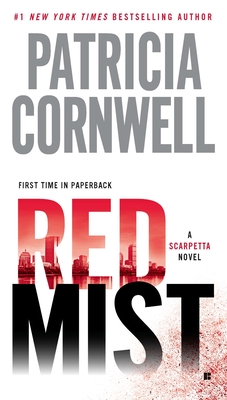 This is book number 19 in the Scarpetta series.

On her quest to find out exactly what happened to her former deputy chief, Jack Fielding, murdered six months before, Scarpetta drives to the Georgia Prison for Women to meet a convicted sex offender and the mother of a vicious and diabolically brilliant killer. Against the advice of her FBI criminal intelligence agent husband, Benton Wesley, Scarpetta is determined to hear this woman out.

Scarpetta has both personal and professional reasons to learn more about a string of grisly killings: the murder of a Savannah family years earlier, a young woman on death row, and then other inexplicable deaths that begin to occur at a breathtaking pace. Driven by inner forces, Scarpetta discovers connections that compel her to conclude that what she thought ended with Fielding’s death and an attempt on her own life is only the beginning of something far more destructive: a terrifying terrain of conspiracy and potential terrorism on an international scale.

And she is the only one who can stop it.

Patricia Cornwell is one of the world’s major internationally bestselling authors, translated into more than thirty-five languages in more than 120 countries. She is a founder of the Virginia Institute of Forensic Science and Medicine; a founding member of the National Forensic Academy; a member of the Advisory Board for the Forensic Sciences Training Program at the Office of the Chief Medical Examiner, New York City; and a member of the Harvard-affiliated McLean Hospital’s National Council, where she is an advocate for psychiatric research. In 2008, Cornwell won the Galaxy British Book Awards’s Book Direct Crime Thriller of the Year—the first American to win this prestigious award. In 2011, she was awarded the medal of Chevalier of the Order of Arts and Letters by the Ministry of Culture in Paris. Her most recent bestsellers include Port Mortuary, The Scarpetta Factor, The Front, and Portrait of a Killer: Jack the Ripper—Case Closed. Her earlier works include Postmortem—the only novel to win five major crime awards in a single year—and Cruel & Unusual, which won Britain’s Gold Dagger Award for best crime novel of 1993. Dr. Kay Scarpetta herself won the 1999 Sherlock Award for the best detective created by an American author.

“When it comes to the forensic sciences, nobody can touch Cornwell.”—The New York Times Book Review

“Cornwell has created a character so real, so compelling, so driven that this reader has to remind herself regularly that Scarpetta is just a product of an author’s imagination.”—USA Today

“Scarpetta is one of the most believable characters in crime fiction.”—The Vancouver Sun