To the Promised Land: Martin Luther King and the Fight for Economic Justice (Paperback) 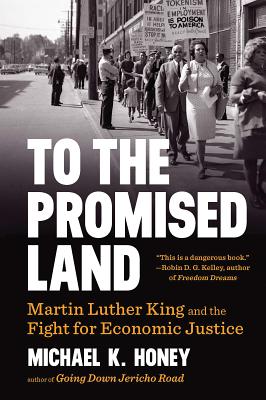 By Michael K. Honey
Please email or call us for pricing on this book.

“This is a dangerous book.”—Robin D. G. Kelley, author of Freedom Dreams

Fifty years ago, a single bullet robbed us of one of the world’s most eloquent voices for human rights and justice. To the Promised Land goes beyond the iconic view of Martin Luther King, Jr., as an advocate of racial harmony, to explore his profound commitment to the poor and working class and his call for “nonviolent resistance” to all forms of oppression, including the economic injustice that “takes necessities from the masses to give luxuries to the classes.”

“Either we go up together or we go down together,” King cautioned, a message just as urgent in America today as then. To the Promised Land challenges us to think about what it would mean to truly fulfill King’s legacy and move toward his vision of “the Promised Land” in our own time.

Michael K. Honey, a former Southern civil rights and civil liberties organizer, is Haley Professor of Humanities at the University of Washington Tacoma, where he teaches labor, ethnic, and gender studies and American history. He is a Guggenheim Fellow and has won numerous research fellowships and book awards for his books on labor, race relations, and civil rights history, including the Robert F. Kennedy Book Award for Going Down Jericho Road. He lives in Tacoma with his wife, Pat Krueger.

A portrait of King that is more accurate, more troubling, and more needed than ever before.
— William P. Jones, author of The March on Washington

A truer portrait of King’s radical hopes. It is an inspiration for the work ahead.
— Glenda Elizabeth Gilmore, author of Defying Dixie

To the Promised Land helps us to remember King as a prophet for poor and working-class people, as we carry on that campaign against racism and poverty in our own times. A terrific book.

— Timothy B. Tyson, author of The Blood of Emmett Till

Michael Honey’s important and timely new book recovers the fullness of King’s social Christian vision. More than just Jim Crow’s most formidable detractor, he was one of capitalism’s most insistent and incisive critics. Honey leaves no doubt that, in our new Gilded Age, King’s dream, marked by a longing for both racial and economic justice, remains as relevant as ever.
— Heath W. Carter, author of Union Made: Working People and the Rise of Social Christianity in Chicago

Honey’s book offers a lively, inspiring, and carefully researched study of King’s efforts for economic justice, reminding readers of this seldom-documented but crucial aspect of King’s legacy.… To the Promised Land is especially timely and revelatory as we struggle still with racism, militarism, poverty, and extreme economic inequality 50 years after the death of King.

Michael Honey’s very cogent book shows that King intended from the start of his public career to work to end racial discrimination and poverty for all Americans.… To the Promised Land’s thorough treatment of King’s efforts to support black unionism and to forge an alliance between the black and the white working classes reveals the arduous effort that he put into this project, most heartbreakingly in his final years.

Honey writes to each margin of the civil-rights era and clarifies it with a deep understanding of King’s true significance.… [To the Promised Land] reveals and raises up the many thousands of people who took King’s advice to commit to ‘dangerous unselfishness’ directly to heart.

King the economic radical has renewed relevance, and Honey’s work helps to shift him from static icon to dynamic thinker whose vision can guide us in taking on the grossly unfair aspects of American capitalism.
— Alternet