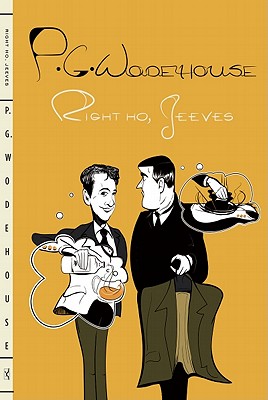 “To dive into a Wodehouse novel is to swim in some of the most elegantly turned phrases in the English language.”—Ben Schott

Follow the adventures of Bertie Wooster and his gentleman’s gentleman, Jeeves, in this stunning new edition of one of the greatest comic novels in the English language. Bertie must deal with the Market Snodsbury Grammar School prize giving, the broken engagement of his cousin Angela, the wooing of Madeline Bassett by Gussie Fink-Nottle, and the resignation of Anatole, the genius chef. Will he prevail? Only with the aid of Jeeves!

P. G. Wodehouse was born in England in 1881 and in 1955 became an American citizen. He published more than ninety books and had a successful career writing lyrics and musicals in collaboration with Jerome Kern, Guy Bolton, and Cole Porter, among others.

Wodehouse is the funniest writer—that is, the most resourceful and unflagging deliverer of fun—that the human race, a glum crowd, has yet produced.
— The New Yorker

I don’t know if I’ve ever derived such an immediate sense of calm and well-being from any book as I did from Right Ho, Jeeves. It was like I was Pac-Man and the book was a power-up.

A brilliantly funny writer—perhaps the most consistently funny the English language has yet produced.
— The Times [London]

Wodehouse’s idyllic world can never stale. He will continue to release future generations from captivity that may be more irksome than our own. He has made a world for us to live in and delight in.
— Evelyn Waugh

The masterly episode where Gussie Fink-Nottle presents the prizes at Market Snodsbury grammar school is frequently included in collections of great comic literature and has often been described as the single funniest piece of sustained writing in the language. I would urge you, however, to head straight for a library or bookshop and get hold of the complete novel Right Ho, Jeeves, where you will encounter it fully in context and find that it leaps even more magnificently to life.

The works of Wodehouse continue on their unique way, unmarked by the passage of time.
— Kingsley Amis