The Heat of the Day (Paperback) 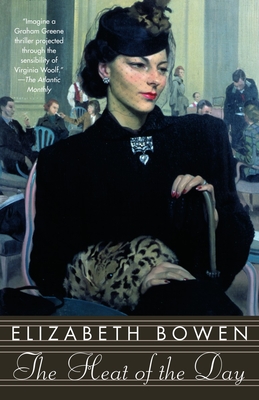 By Elizabeth Bowen
Please email or call us for pricing on this book.

In The Heat of the Day, Elizabeth Bowen brilliantly recreates the tense and dangerous atmosphere of London during the bombing raids of World War II.

Many people have fled the city, and those who stayed behind find themselves thrown together in an odd intimacy born of crisis. Stella Rodney is one of those who chose to stay. But for her, the sense of impending catastrophe becomes acutely personal when she discovers that her lover, Robert, is suspected of selling secrets to the enemy, and that the man who is following him wants Stella herself as the price of his silence. Caught between these two men, not sure whom to believe, Stella finds her world crumbling as she learns how little we can truly know of those around us.

Elizabeth Bowen was born in Dublin in 1899. She wrote many acclaimed short stories and novels, including The Heat of the Day, The Death of the Heart, The Last September, and Eva Trout. She was awarded the CBE (Commander of the Order of the British Empire) in 1948. She died in 1973.

"Imagine a Graham Greene thriller projected through the sensibility of Virginia Woolf." —The Atlantic Monthly

“[Bowen] startles us by sheer originality of mind and boldness of sensibility into seeking our world afresh. . . . Out of the plainest things--the drawing of a curtain--she can make something electric and urgent." --V. S. Pritchett

"Dense as a poem with symbol and suggestion. . . . The work of a writer [of] rich and winning gifts." —Time

"Miss Bowen [has] power to evoke, suggest and explore down oblique and little-frequented avenues the mysterious centers of human conduct." --The New York Times