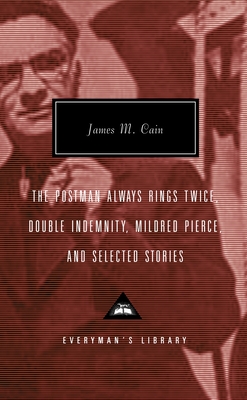 By James M. Cain, Robert Polito (Introduction by)
$27.00
Email or call for price

These three classics from the master of the noir novel, along with five otherwise unavailable short stories, are electric with the taut narrative voice, the suspense, and the explosive violence and eroticism that were James M. Cain’s indelible hallmarks.

The Postman Always Rings Twice, Cain’s first novel–the subject of an obscenity trial in Boston, the inspiration for Camus’s The Stranger–is the fever-pitched tale of a drifter who stumbles into a job, into an erotic obsession, and into a murder. Double Indemnity–which followed Postman so quickly, Cain’s readers hardly had a chance to catch their breath–is a tersely narrated story of blind passion, duplicity, and, of course, murder. Mildred Pierce, a work of acute psychological observation and devastating emotional violence, is the tale of a woman with a taste for shiftless men and an unreasoned devotion to her monstrous daughter. All three novels were immortalized in classic Hollywood films. Also included here are five masterful stories–“Pastorale,” “The Baby in the Icebox,” “Dead Man,” “Brush Fire,” “The Girl in the Storm”–that have been out of print for decades.

James Mallahan Cain (1892 - 1977) was a first-rate writer of American hard-boiled crime fiction. Born in Baltimore, the son of the president of Washington College, Cain began his career as a reporter, serving in the American Expeditionary Force in World War I and writing for The Cross of Lorraine, the newspaper of the 79th Division. He returned from the war to embark on a literay career that included a professorship at St. John's College in Annapolis and a stint at The New Yorker as managing editor before he went to Hollywood as a script writer. Cain's famous first novel, The Postman Always Rings Twice, was published in 1934 when he was forty-two, and became an instant sensation. It was tried for obscenity in Boston and was said by Albert Camus to have inspired his own book, The Stranger. The infamous novel was staged in 1936, and filmed in 1946 and 1981. The story of a young hobo who has an affair with a married woman and plots with her to murder her husband and collect his insurance, The Postman Always Rings Twice is a benchmark of classic crime fiction and film noir. Two of Cain's other novels, Mildred Pierce (1941) and Double Indemnity (1943), were also made into film noir classics. In 1974, James M. Cain was awarded the Grand Master Award by the Mystery Writers of America. Cain published eighteen books in all and was working on his autobiography at the time of his death.

“[James M. Cain is] a poet of the tabloid murder.” –Edmund Wilson

“Nobody has quite pulled it off the way Cain does, not Hemingway, and not even Raymond Chandler.” –Tom Wolfe

“Mr. Cain is a real writer who can construct and tell an exciting story with dazzling swiftness . . . [his] work has a fast rhythm that is art.” –Saturday Review of Literature

“Cain can get down to the primary impulses of greed and sex in fewer words than any writer we know of.” –New York Times