Run and Hide: A Novel (Hardcover) 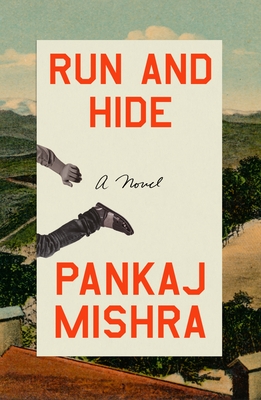 "Pankaj Mishra transforms a visceral, intimate story of one man’s humble origins into a kaleidoscopic portrait of a society bedazzled by power and wealth—what it means on a human level, and what it costs. Run and Hide is a spectacular, illuminating work of fiction." —Jennifer Egan, author of Manhattan Beach

Growing up in a small railway town, Arun always dreamed of escape. His acceptance to the prestigious Indian Institute of Technology, enabled through great sacrifice by his low-caste parents, is seemingly his golden ticket out of a life plagued by everyday cruelties and deprivations.

At the predominantly male campus, he meets two students from similar backgrounds. Unlike Arun—scarred by his childhood, and an uneasy interloper among go-getters—they possess the sheer will and confidence to break through merciless social barriers. The alumni of IIT eventually go on to become the financial wizards of their generation, working hard and playing hard from East Hampton to Tuscany—the beneficiaries of unprecedented financial and sexual freedom. But while his friends play out Gatsby-style fantasies, Arun fails to leverage his elite education for social capital. He decides to pursue the writerly life, retreating to a small village in the Himalayas with his aging mother.

Arun’s modest idyll is one day disrupted by the arrival of a young woman named Alia, who is writing an exposé of his former classmates. Alia, beautiful and sophisticated, draws Arun back to the prospering world where he must be someone else if he is to belong. When he is implicated in a terrible act of violence committed by his closest friend from IIT, Arun will have to reckon with the person he has become.

Run and Hide is Pankaj Mishra’s powerful story of achieving material progress at great moral and emotional cost. It is also the story of a changing country and global order, and the inequities of class and gender that map onto our most intimate relationships.

Pankaj Mishra is the author of From the Ruins of Empire, Age of Anger, and several other books. He is a columnist at Bloomberg View and writes regularly for The Guardian, the London Review of Books, and The New Yorker. A fellow of the Royal Society of Literature, he lives in London.

"Mishra has a bit of Balzac in him—for instance, his belief that character reveals itself through surface detail, if that detail is observed ruthlessly enough . . . Run and Hide is a novel of modern India that takes some of the big-picture phenomena from Age of Anger and—as good social novels have always done—gets us to engage on the level of feeling by returning those abstractions to human scale.”
—Jonathan Dee, The New York Times Book Review

"Mishra is a masterful eyewitness to the modern world, equally unafraid of nuance, earnestness and absurdity. [Run and Hide] is a slow, careful book about a fast and reckless world. This is not a destination novel; it is a journey novel. One well worth taking."
—Samantha Schoech, San Francisco Chronicle

"Remarkable . . . In evocative prose, Mishra leads his reader into the claustrophobic environs of the desperately wanting . . . Sharp and propulsive."
—Rafia Zakaria, The New Republic

"Run and Hide’s flashback narrative, which slowly reveals the story, is an impressive feat of craft, and the book rewards a second reading . . . a moving novel that should assure Mishra’s standing as a writer of fiction as well as non-fiction."
—Arin Keeble, Financial Times

“[Run and Hide] develops into a multi-layered novel, bursting with ideas . . . There is more than a whiff of The Great Gatsby.”
—Chris Moss, Prospect (UK)

“A profoundly literary voice, as interested in how to write about a subject as the subject itself . . . [Run and Hide] offers a new way to envision what is by now, for him, familiar material . . . Mishra is having fun with the newfound freedom of fiction, and the reader comes to share in it . . . After the density of his recent books, with their weighty bibliographies, Mishra’s fictional prose is permitted, once again, to take lyrical flight.”
—Tanjil Rashid, The Guardian (UK)

“There is an arresting contrast in style between the political writings on which [Mishra’s] reputation is chiefly built and the more introspective mode on display in his memoir and fiction. Those weaned on the gripping velocity and adamantine syntax of Mishra’s essays may be surprised by the assiduous lucidity and serene poise of his new novel Run and Hide.”
—Lola Seaton, The New Statesman (UK)

"Pankaj Mishra is as sharp, provocative and engagé as you’d expect. An exploration of Narendra Modi’s autocratic, Hindu-nationalist New India seen through the progress of three graduates from the prestigious Indian Institute of Technology, it’s also reassuringly rich in characterization and the sheer sensory overload of modern life.”
—Jude Cook, The Spectator (UK)

“In his first novel in more than 20 years, acclaimed essayist Mishra splices a cautionary tale with elegant examination of globalization and the perils of the changing world order. Immensely thought-provoking.”
—Simon Humphreys, Daily Mail (UK)

"A deeply critical portrait of what he terms the ‘IIT generation’ of educated Indians who made their fortunes in a rapidly changing India and globalizing world and of the personal and social costs of those changes . . . A vivid, multifaceted study of India today.”
—Lawrence Rungren, Library Journal

“Pankaj Mishra is an exceedingly elegant systems thinker; his unparalleled intellectual grasp of contemporary political and economic culture is always a delight to encounter. Mishra writes with erudition, clarity, and deep humanity, and doesn’t shy away from satisfyingly targeted polemics that call out shallow thinking in service of power.”
—Jonny Diamond, Literary Hub

“[Pankaj Mishra] finally turns to fiction again. Here he shows himself to be just as much an astute chronicler and analyst of globalization and its consequences, especially for individuals, as in his non-fiction.”
—Michael Orthofer, The Berkshire Eagle

“A novel so inspired, so truth-radiant, that it could split atoms—or stop time—or seed hope. Mishra sings the planet electric and his elegiac tale of ruthless ambition and writerly love is by turns achingly irresistible and terrifyingly bracing—like seeing yourself or your world, without illusion, for the first time. Run and Hide is the coup de literature our demented age needs from one of the finest, bravest writers we have.”
—Junot Díaz, author of The Brief Wondrous Life of Oscar Wao

"This powerful novel is a searing examination of our recent cultural and political trajectory, a surprising meditation on the role of the writer in times such as ours, a fragile love story, and an unforgiving look at where we are headed. It is, in other words, a book that demands to be read and rewards reading.”
—Mohsin Hamid, author of Exit West

"A wonderfully rich portrait of friends bound by a childhood experience of deprivation, pursuing wildly different ambitions in India, Great Britain, and the United States. Pankaj Mishra writes with great intelligence and lyrical beauty about the perennial struggle for dignity and stability in a rapidly changing world—and how in this process identities are reinvented, reclaimed or renegotiated, sometimes with violent consequences."
—Laila Lalami, author of The Moor's Account

"A profound, extraordinarily written, and devastating exploration of the ways the personal is always already the political, Run and Hide takes the temperature of the 'current moment' and gives us cogent, coherent answers for how we got here. Mishra has imbricated the individual, the primary subject of the novel form, in the dense forces of history and in the process created something new and unforgettable.’
—Neel Mukherjee, author of The Lives of Others

"Whether writing about a Himalayan village or cosmopolitan London, Pankaj Mishra combines a powerful historical understanding of the contemporary world with psychological insight and a deep feeling for landscape. In Run and Hide, he has created an absolutely new kind of immigrant story—one in which achieving your wildest dreams might mean giving up everything, even once you return home."
—Nell Freudenberger, author of Lost and Wanted and Lucky Girls

"Pankaj Mishra returns to fiction after two decades with a gripping and remarkable novel—his best work yet. Run and Hide has his deepened sense of a class that consolidated its fortunes in this period and then lost its way, of the fragility and tenacity of India’s hidden legacies; and it captures the trajectory of our time through insights and moments that are startling, pure, and have a strange inevitability."
—Amit Chaudhuri, author of Friend of My Youth

"Pankaj Mishra kept us waiting 20 years for a new novel, and it becomes apparent, as soon as you pick up Run and Hide, that time has honed one of our greatest writing talents. The narrative draws you in more keenly than any boxset and the prose shimmers with wisdom. Marvelous."
—Sathnam Sanghera, author of Empireland: How Imperialism Has Shaped Modern Britain