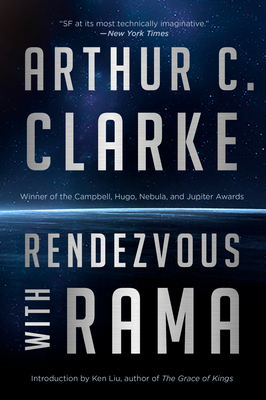 Astronauts explore an alien spacecraft hurtling toward the sun in this Hugo and Nebula Award–winning novel —“a stone-cold classic” of hard sci-fi (The Guardian).

An enormous cylindrical object has entered Earth’s solar system on a collision course with the sun. A team of astronauts are sent to explore the mysterious craft, which the denizens of the solar system name Rama. What they find is astonishing evidence of a civilization far more advanced than ours. They find an interior stretching over fifty kilometers; a forbidding cylindrical sea; mysterious and inaccessible buildings; and strange machine-animal hybrids, or “biots,” that inhabit the ship. But what they don’t find is an alien presence. So who—and where—are the Ramans?

Often listed as one of Clarke’s finest novels, Rendezvous with Rama won numerous awards, including the Hugo, the Nebula, the Jupiter, and the British Science Fiction Awards. A fast-paced and compelling story of an enigmatic encounter with alien technology, Rendezvous with Rama offers both answers and unsolved mysteries that will continue to fascinate readers for generations.

“Mr. Clarke is splendid . . . We experience that chilling touch of the alien, the not-quite-knowable, that distinguishes SF at its most technically imaginative.” —The New York Times

ARTHUR C. CLARKE, one of the most influential figures in twentieth-century science fiction, has written over fifty novels and cocreated the movie 2001: A Space Odyssey.

"It was delightful to be presented with a scene to stagger the imagination and yet have it described so exactly and meticulously as to know you have been there." —Isaac Asimov   "Arthur has done it again—proved that the chief ingredient of superior science fiction is story." —Frank Herbert   "Something for everybody—politics, religion, and all kinds of science wrapped up in a taut mystery-suspense." —Publisher's Weekly   "Mr. Clarke is splendid. . .We experience that chilling touch of the alien, the not-quite knowable, that distinguishes SF at its most technically imaginative." —The New York Times —