No Place for Monsters (Hardcover) 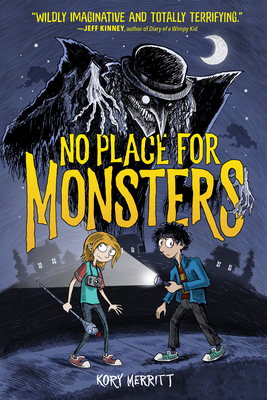 Levi and Kat are about to discover a very dark side to their neighborhood.

Nothing ever seems out of place in the safe, suburban town of Cowslip Grove. Lawns are neatly mowed, sidewalks are tidy, and the sounds of ice cream trucks fill the air. But now . . . kids have been going missing—except no one even realizes it, because no one remembers them. Not their friends. Not their teachers. Not even their families.

But Levi and Kat do remember, and suddenly only they can see why everyone is in terrible danger when the night air rolls in. Now it is up to Levi and Kat to fight it and save the missing kids before it swallows the town whole.

“Wildly imaginative and totally terrifying—No Place for Monsters will scare you silly!” — Jeff Kinney, author of Diary of a Wimpy Kid

"Merritt's imagination is a haunted garden, overgrown with fantastic ideas....[his] art seizes your attention and does not let go....Like a fine pumpkin stew, ‘No Place for Monsters’ is spicy and comforting and perfectly autumnal….Trick-or-treating might have been declared a severe health hazard this season, but Merritt’s unsettling world is open for some safe spookery.” — New York Times Book Review

"No Place For Monsters is like a haunted-house version of Charlie and the Chocolate Factory. Kory Merritt’s wonderfully scary drawings will keep you turning the pages through this truly spooky adventure." — Brian Selznick, New York Times bestselling author of The Invention of Hugo Cabret and Wonderstruck

"No Place for Monsters is so striking, it leaves an after image. You'll be seeing the art long after you've shut your eyes for the night. Kory Merritt’s vision of monsters in our world is terrifying and unforgettable.” — Max Brallier, New York Times bestselling author of the Last Kids on Earth series

"This is one hell of a middle-grade read, the kind that will spark imaginations as it is read late at night under the covers with a flashlight. . . . A wonderfully spooky tale." — Kirkus Reviews (starred review)

"Merritt’s scratchy black-and-white line illustrations expertly embody Levi’s calm practicality, Kat’s hyperactive exuberance, and the twisting otherworldliness of their cryptid foes. Solid use of light and shadow manipulate the atmosphere and tension levels as the story goes from mundane to frightening, while tongue-in-cheek visual jokes make every scene worth studying. Weird, wild, and warmhearted, this is a real page-turner for the spooky season." — Publishers Weekly (starred review)